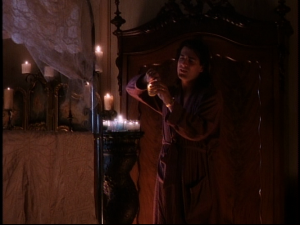 Indeed, as a quiet teen, all those sensitive final girls provided Big Gay Horror Fan with an emotional resonance that has made him a bound and gagged fright fan for eternity. But, let’s be honest. It was all those hot, barrel chested twenty something dudes frolicking through neon yards of slasher celluloid that kept him coming back for more!

But talk about your lousy law of averages! For every sweet feminine nipple on display in our torture opuses and forbidden treks into terror, the ratio of bare male flesh is abysmally miniscule. And despite my fascination with Playboy magazine models and busty scream actresses, this surely doesn’t seem fair. So, I have vowed to, bi-weekly, visit those treasured (and not so treasured) horror flicks and television shows that have given us a bit of the male bits for our eternally trembling visual pleasure. So, please bare with me, because here we go!

The fifth episode of the first season of HBO’s beloved Tales from the Crypt, Lover Come Hack to Me (1989), finds genre regular Stephen Shellen (The Stepfather, Damned River, American Gothic, Drop Dead Gorgeous) as a fortune hunter whom marries consistently odd character actress Amanda Plummer’s character for her money. Of course, the twist is that Plummer’s Peggy is actually a sex kitten with a murderous lust and deliciously dark secret.

To help sell that shock, though, the brilliantly generous producers give us a long scene where the supposedly shy Peggy squirms as Shellen’s (recently rain soaked) cad undresses in front of a crackling fire, in a seemingly abandoned mansion. The camera lingers for a long while on Shellen’s beefy bare buttocks, ultimately giving all fey fright fans (and the lusty ladies, for that matter) in the audience something to dream about!

Going the distance for his long adoring fans, Shellen (and a fairly obvious movement body double), also, gave B-Movie lovers a wet delight in 1984 T and A comedy Gimme Me an ‘F’. Here, our stud of the day performed a sensual, highly athletic shower dance:

Of course, Shellen’s acting talent matched his physical beauty and it was always a joy to discover him onscreen – whether it was in a smaller role in gloriously cheesy television mini-series Hollywood Wives or a major role in a comedy like Casual Sex?

Be sure to check back, every other Monday, for a ‘serious’ look at male nudity in terror flicks.

Until the next time, SWEET love and pink GRUE!!

3 comments on “Celebrating Stephen Shellen – “Lover Come Hack to Me””