Big Gay Horror Fan is always reading it wrong. Specializing in his own brand of reverse egoism, he always believes that those whispering in the corner are mocking his latest Friday the 13th shoeware or giggling about his lace tripping lack of social finesse.

Meanwhile, writer- director Zack Parker (along with co-scripter Brandon Owens) features a more challenging look at mixed perceptions in his tautly passionate feature Scalene. A point of view piece, split between three incredibly different individuals, this dramatic thriller examines what happens when a well-to-do college student is attacked by the handicapped young man under her care. 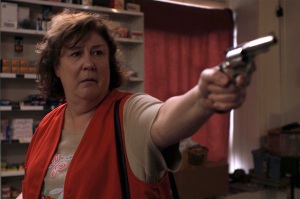 Featuring a massively complex performance (by Emmy award winning) Margo Martindale as the young man’s mother, Parker imaginatively shows different perspectives on the same scenario. Martindale’s Janice, therefore, comes off, alternatively, as a bawdy saint devoted to her frustrated child or emotionally blunt and abusive, depending on the point of view. Therefore, initial sympathy for the vengeful woman turns into questioning as concerned caregiver Paige (a compassionate Hannah Hall – best known to scare lovers from Rob Zombie’s Halloween) witnesses what could be extreme misbehavior from her employer. How she reacts to this forms the basis of the film’s emotionally charged action with confused patient Jakob (a sensational Adam Scarimbolo), whose garbled take on the situation appears as a bridge between acts, caught in the middle.

Stunning and intriguing, Scalene unfolds in a nonlinear fashion that leaves one curiously eager to discover the mysteries behind Paige’s account of the attack and Janice’s firm belief in his innocence.

Be sure to unravel the further beauties of Scalene, which was released by Breaking Glass Pictures (www.breakingglasspictures.com) on July 31st, at http://www.facebook.com/#!/pages/SCALENE/186016059605.

Until the next time, SWEET love and pink GRUE, Big Gay Horror Fan!!!