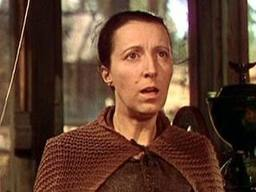 Hanging out on the sidelines while everybody else is seemingly having the major fun – this is a situation that Big Gay Horror Fan knows well. 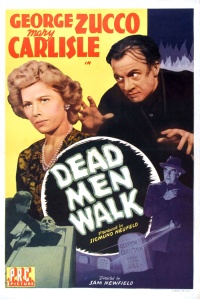 Of course, awesome individuals like veteran character actress Fern Emmett (1896-1946) are able to rise, grandly, above such situations. With over 200 films to her credit, Emmett often made a strong impression in small (and frequently uncredited roles) in the golden age of horror.

Dying far too young from cancer, Emmett provided hysterical back-up to Monty Wooley during the final year of her life in 1946’s big budget exploration of Cole Porter in Night and Day. In an office setting, Wooley references her secretary character every time he sings the word Madame in the song “Ms. Otis Regrets”. Emmett’s arched eye acknowledgements of his gesture secure this sequence’s place as the fictionalized film’s highlight. 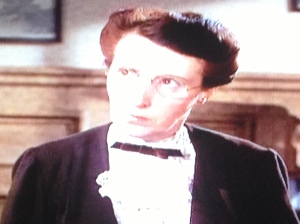 But, while she often decorated big budget projects with calculated humor, one of Emmett’s largest roles was in the PRC’s poverty row production of Dead Men Walk in 1943. Featuring horror regulars George Zucco and Dwight Frye, Emmett played Kate, a woman well aware of the undead experimentation occurring in her village. Of course, locals doubt her observations, chalking them up to grief stricken cries for help – until it is too late!

Thirteen years before this film, Emmett appeared in Majestic Pictures’ similar outing The Vampire Bat (1933), starring the elegant Lionel Atwill and the ever humbled Frye. Best known as one of the films that secured lead actress Fay Wray’s title as the original scream queen, Emmett has a couple scenes as Gertrude, the concerned companion of the film’s first female victim, an elderly woman of status.

Smaller roles in the Universal classics came towards the end of her life. In 1942’s fun and atmospheric The Mummy’s Tomb, Emmett plays dressmaker to the beautiful Elyse Knox’s Isobel, the film’s endangered heroine. 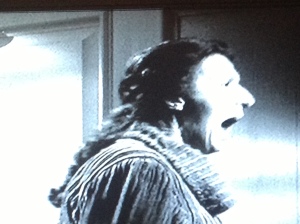 In 1943, Emmett achieved grand victimhood by taking one for genre goddess, Evelyn Ankers, whom was portraying Beth in Captive Wild Woman. As Aquanetta, in savage ape form, storms Beth’s room with murder on her mind, Emmett’s neighbor emerges from her room. Soon Emmett’s concerned citizen is meeting her squealing fate at the hairy hands of Aquanetta’s re-focused fury.

But, whether appearing just to enact a frenzied death throes or to offer up some quick comic goodness, Emmett always made a memorable presence – proving, that while her name may not rank up with there with the Garbo’s and Dietrich’s of her era, it certainly should.

Be sure to check back often as Big Gay Horror Fan frequently examines the glorious wonders of women in horror.

Meanwhile, Big Gay Horror Fan is always welcoming friends of the towering femmes of terror at http://www.facebook.com/#!/BigGayHorrorFan, as well!