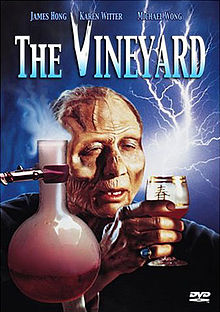 (Imagined) money, scientific appeal, a fine liquor collection – Big Gay Horror Fan knows that these things guarantee you nothing in the romance department. Too bad he wasn’t around to help James Hong’s Dr. Elson Po discover this before the bloody mayhem ensued in 1989’s hilariously fun The Vineyard.

Yes, Hong’s Po is a successful businessman with his own island estate, a fine winery and a way with acupuncture needles. But all that doesn’t keep his young wife, played by Lissa Zapperdino, out of the sexual clutches of his studly mechanic Mike, hunky stuntman Mark De Alessandro.

As Mike, De Alessandro (whom has worked on such features as Starship Troopers, The Mist and the Pulse series) shares a wink with Ho’s betrothed in the film’s early moments. Soon, they are enjoying an outdoor romp which features a nice shot of De Alessandro’s incredible physique – including an incredibly sexy stroll down the peripheries of his incredibly toned butt cheeks. Of course, Hong’s Po soon has his savage revenge on Mike – which indicates he probably didn’t need my help, anyhow. 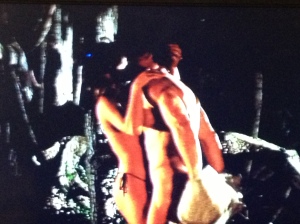 Further pleasure in this insane mad scientist/zombie/kung-fu/samurai legend/kids in peril hybrid can be found within a couple of its cast members’ fascinating genre credits. The beautiful Karen Witter (Popcorn, The Hero and the Terror, Buried Alive, Out of the Dark, Midnight) heads the ensemble of young folks as (the awesomely named) Jezabel Fairchild with support from The Dead Pit’s Cheryl Lawson as the bugged out Claudia.

Throw in a flamboyant middle-aged European type who leads the kids to their doom, a supporting cast largely inspired by their ability to do stunts (many of whom never worked as performers again) and a moment or two of over-the-top drag action provided by dimwitted, muscle bound Brian (Sean Donahue) and it’s very clear that De Alessandro’s disrobing is part of one crazy stylistic wonder!

You can check out the hypnotic madness of The Vineyard at:

Be sure to check back here often for more explorations into the backside of horror!

2 comments on “The Backside of Horror: Mark De Alessandro in The Vineyard!”