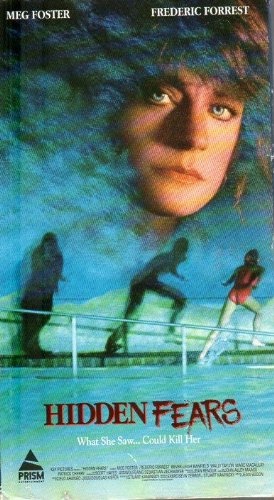 (The Carrie remake will be upon us on October – thus we celebrate the strong women in horror, science fiction and exploitation with Countdown to Carrie!)

Quinn: (Quietly shuddering) God, he was ugly!
Stan: How can you stand it?
Quinn: (Coldly) When I close my eyes…all men are the same. – Immortal Combat

The generously eclectic Meg Foster may be best known to genre fans for her diverse roles in such projects as They Live, Masters of the Universe and Stepfather II – but multiple (often more obscure) projects have benefited from her quiet authority, as well.

In 1993, Foster reunited with (her They Live co-star) Roddy Piper in the karate-action–science fiction-horror-buddy film (are you dizzy yet???!!!) hybrid Immortal Combat (released in 1994). Using soft undercurrents, Foster imbues her evil Quinn will nerve chilling monstrousness. Proving that underplaying is the skilled performer’s greatest asset, she emerges as the prime force, here, despite plenty of gloriously sock-em displays of back flipping, masculine martial arts mayhem. 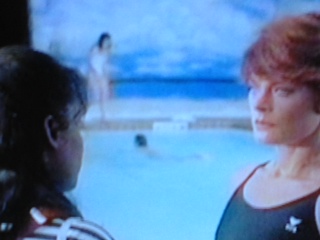 The same year, Foster proved her amazing versatility by playing a grieving wife and mother in the domestic thriller Hidden Fears. Years after the murder of her husband in a parking lot by two redneck hoods, Foster’s Maureen Dietz learns the identities of his killers. Publically exposing them brings her family and friends into jeopardy’s way, though. As the bodies begin to pile up, Foster-Dietz begins to realize the true source of danger may reside closer to home than she ever could have imagined. Once again, it is the quieter tones that Foster applies here that sparkle with ingenuity (in an often standard script). Her natural connections with skilled co-stars such as Frederic Forrest and Bever-Leigh Banfield are what help make this project rise above the ordinary.

Midwest dwellers can revel in the presence of the delicious Foster on August 9, 10, 11, 2013 at Flashback Weekend, Illinois’ homegrown horror convention!: http://www.flashbackweekend.com.

Big Gay Horror Fan, meanwhile, is always evading the dangerous pursuers of his past at http://www.facebook.com/biggayhorrorfan!

Until the next time – SWEET love and pink GRUE!!!!