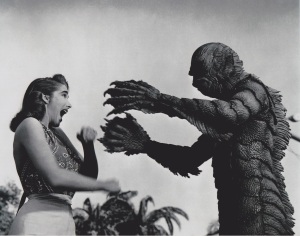 With a generosity of spirit to match her exquisite beauty, actress Julie Adams has graced audiences with performances of depth and keen perception since her earliest days in Hollywood. Well known for her portrayal of the heroic character of Kay in the legendary Creature of the Black Lagoon, Adams recently has written about all of her performing adventures in the well received The Lucky Southern Star. In anticipation of her upcoming appearances in Chicago on the weekend of September 28th, 2013, the vibrant Adams took a moment to speak with Big Gay Horror Fan about some of her activities as an actress outside the lagoon!

BGHF: Julie, viewers are very aware of your role in Creature, but you have participated in an amazing variety of projects. If you could pick one or two people to re-visit from your career, who would they be?

Julie Adams: One would be James Stewart; I had the good fortune to work with him a couple of times. Once, when I was very young, in Bend of the River and again, about twenty years later, when I played his wife on The Jimmy Stewart Show! Another film star that I adored was Tyrone Power, whom I worked with in The Mississippi Gambler in 1953. Sadly, he died of a heart attack five years later at the age of 44. I would have loved to have had the opportunity to be in another film with him. 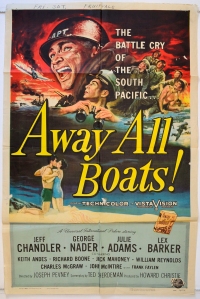 BGHF: You, also, worked with George Nader, whom is known to terror freaks for his role in Robot Monster, a number of times. Can you talk a bit about working with him?

Julie: I liked working with George Nader a lot. He was a wonderful person and a real professional. You could always be focused on the work with him and still have a good time doing it. There was one scene we did together that was particularly fun in Away All Boats. My character Nadine did a little hula for her husband, Navy Lieut. Dave MacDougall (George Nader) while he strums a ukulele — it was such a cute moment in the film! I fondly remember all of the scenes I played with George. He was handsome, charming, and a fine actor.

BGHF: That’s so nice to hear! In one of the beloved episodes of The Night Stalker, “Mr. R.I.N.G.” , you played the very spirit happy Mrs. Walker. What do you have to do with your body chemistry to portray a believable drunk? 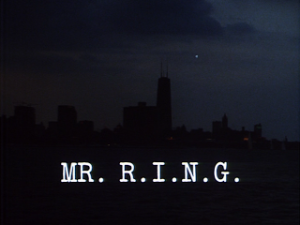 Julie: I didn’t really think of Mrs. Walker as a drunk. I just thought she was a rascally character who liked the finer things in life, whether it be a drink in the afternoon or wearing fancy clothes. One key to playing a drinker convincingly is not going too far with it. A little goes a long way. I tried to give Mrs. Walker an attitude; she certainly didn’t care much for the government program that got her husband killed. So I tried to let that attitude come out with her flippant behavior. Of course, playing dark comedy with Darren McGavin was a dream!

BGHF: Naturally! You were vigilant in 1988’s Black Roses and expressed stern concern in 1978’s The Fifth Floor. Though not as well respected as mainstream films, do you feel exploitation and genre projects have given you a wider range to express your skills as an actress? 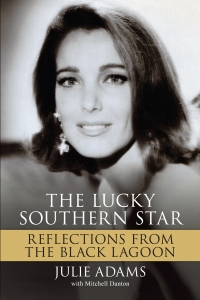 Julie: Genre projects often have an other-worldly element to them. As an actress, I always tried to ground my character in reality, even when fantastical things were happening around her. However, films of this nature usually have scenarios that aren’t typical of more mainstream cinema, so that presents certain challenges. So in this regard, these films did expand my range as an actress.

Be sure to visit the legendary Julie (and son Mitch Danton)this weekend in Chicago at the historic Patio Theatre for two 3-D showings of Creature of the Black Lagoon.

4 comments on “Julie Adams: Away All Boats with the Creature’s Fabulous Heroine!”