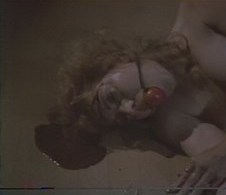 Do you long for those good old days (in the late 80s and early 90s) when flicks by Wynorski, Corman, Schmoeller and DeCoteau were always popping up on cable, featuring appearances by the video box ladies that we all grew to love? As the Bloody Goddess can tell you, I certainly do! So, let’s re-visit a classic, now!

Proving that no one made (or makes) an entrance quite like her, DVD doll Deborah Dutch resonates, mightily in the first moments of Fred Olen Ray’s gritty 1994 effort Mind Twister. Though the film features everyone from Telly Savalas to Richard Roundtree, it is Dutch’s portrayal of the doomed Sheila Harrison in the opening moments that, ultimately, counts the most here.

Struggling against a demented transgressor, Dutch/Harrison eventually loses her life in a glass splattering frenzy. Though quickly dispatched, Dutch makes every second matter, providing the film with its most memorable moments. Her obvious stage training bursts forth – even as Harrison flies through the air to her doom.

What more can one say than that? 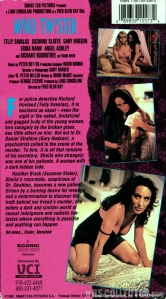 Well, except be sure to check out Dutch’s latest (and greatest) project The Hollywood Warrioress at https://www.facebook.com/hollywoodwarrioress.

And look back, here, for future Saturday Scream Queen Flashbacks.