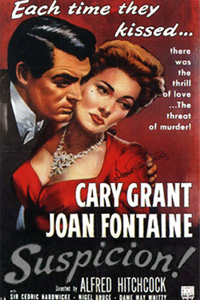 The mind-blowingly insecure (myself included) will always relate to the tender hope and brilliant confusion that the divine Joan Fontaine perfectly illustrates as bookish Lina in Alfred Hitchcock’s nicely realized 1941 thriller, Suspicion. As the suave Johnny (played with handsome charm by the legendary Cary Grant) pursues and eventually marries her, Fontaine brims with devoted confusion. Of course, just when she seems sure of his affections, Lina finds herself believing that financially troubled Johnny is capable of murder and presently plotting her death to gain the insurance money. 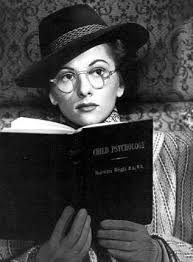 Hitchcock works with his typical slow boil, here, making marvelous use of shadows and ably coloring ordinary exchanges with a feeling of dread and suspense. Fontaine, who won the Oscar for her portrayal, flawlessly assists him in his goals. Thriller enthusiasts may find disappointment in the ending, as contrary to the source material, Johnny’s innocence is revealed. Pesky studio executives thought that if Grant played a cold blooded killer that his reputation (and box office appeal) would be tarnished.

But, what does emerge is a full portrait of a woman in various (true to life) emotional stages. Nothing is for certain in our existence, therefore Lina’s journey from shy to sure to questioning, results in a suspense filled love story that anyone with (even a dab of) sensitivity can, eventually, relate to.