Sometimes, I look like such a demon upon waking that I even frighten my Incredible Hulk action figures. (And you wonder why I am in my 40s and live alone!!!)

The magnetic Bojesse Christopher, who truly enlivened such efforts as Sleepwalkers, Meatballs 4 and Point Break in the 90s, also rises like a devilish entity in 1996 sequel shocker Sometimes They Come Back…Again. But, soon Christopher’s Vinnie takes on a much more pleasing — and temporarily naked — form. 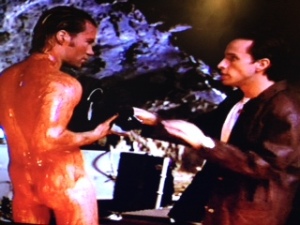 Of course, the evil Vinnie is eventually dispatched – but not before providing plenty of menace to co-stars Michael Gross and (a young) Hillary Swank…and plenty of eye candy to desirous viewers in the know!

Until the next time…SWEET love and pink GRUE, Big Gay Horror Fan