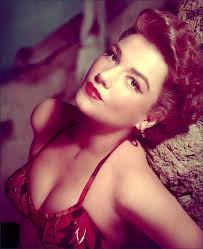 In grade school, two (supposedly) darling twin sisters used to regularly manipulate me out of my place in the lunch line. Too bad I didn’t have the divine Anne Baxter (1923-1985), who smartly outmaneuvered diva-licious Bette Davis in the 1950 classic All About Eve, around to give me some (nail sharp) pointers. 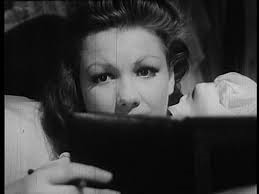 Baxter, who won an 1946 Oscar for her performance in The Razor’s Edge, had plenty of practice in devilishness, though. Six years before Eve in the deliciously outrageous Guest in the House, Baxter worked her poisonous magic as the sinister Evelyn Heath. Determined to win over the artistic Douglas Proctor (Ralph Bellamy), Baxter/Heath rids herself of her rivals with glorious stealth. A wise maternal character ends this prime villainess’ run of good luck, though. In a move of operatic goofiness, Baxter’s character goes over a cliff due to her character’s major downfall, a supreme fright of pet birds!

In 1970 television flick Ritual of Evil, Baxter shows her universality. Here, she shades her character Jolene Wiley with fine layers of sensitive hopelessness. A faded Hollywood icon, Wiley drowns herself in drink and the wrongheaded notion that a Satanic cult might restore her former glory. With a voice crackling with whiskey undertones, Baxter reigns with sexy glamour and emotional empathy. While Louis Jourdan’s erudite psychiatrist uncovers the mystery behind the coven and, ultimately, saves the day here – it is Baxter’s eternal smokiness that steals the show.