While my overactive mouth has definitely put my ass on the line a time or two, I have never ever thrown my butt out a window! I swear!

It’s probably a good thing, too, as that trick was done with rare perfection by Todd Conaster as Virgil in the little known 1989 Italian-American teen horror Superstition 2 (AKA Witch Story and Streghe). 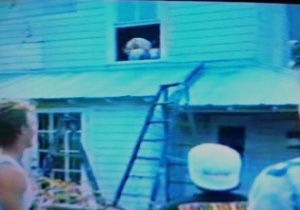 Directed by Alessandro Capone (who, also, wrote the rather obscure Body Count, which starred David Hess and Mimsy Farmer), Superstition 2 concerns a brother and sister who inherit a house that has been cursed by their distant relative, a vengeful witch. A group of friends joins them to help in refurbishing the property. Of course, the girls soon find themselves possessed by the scorned sorceress and the boys are soon meat gumbo!

But not before Conaster’s Virgil, in a moment of comic relief, bares his cheeks to his passing brethren – earning him an especially bloody death at the hands of two of his feminine companions. Some guys just don’t learn!

As for the film, itself, the acting of (the unknowns as) the teens is rather overblown, but veterans Ian Bannen, as a wild eyed and regret filled priest, and Deanna Lund, as the deliciously evil temptress, more than make up for it. There are, also, some impressive kills including one involving a mysteriously appearing chainsaw from the middle of a swimming pool! Let King Arthur try that one!