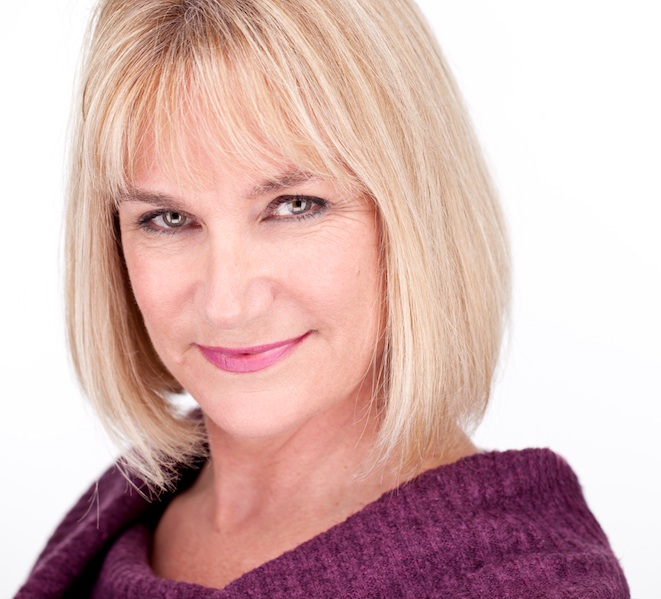 After that incident with the pies in 5th grade, I was forever known as Blueberry.

…and while specific recognition may have its many rewards, sometimes it can limit the scope of one’s overview. This is certainly the case with the brilliantly talented actress/dancer/instructor Debra De Liso. De Liso, who recently won the prestigious Rainbow Award from the Los Angeles Women’s Theatre Festival, is best known for her ingratiating performance of Kimberly Clark in slasher classic The Slumber Party Massacre. While her work in TSPM definitely contains some of the most authentic acting in the entire 80s horror universe, De Liso has plenty of other accomplishments to her name.

As “Grace” in Caligari

Popping up in the 1989 oddity Dr. Caligari allowed De Liso to truly show her acting range. Unlike her rambunctious Kimberly, De Liso’s Grace in this wildly impressionistic feature is a prim, religious schoolteacher. This film also allowed De Liso to move from the refrigerator (where Kimberly met her grim comeuppance) to the stew, itself. Grace ultimately ends up as part of an over-the-top madman’s meal. 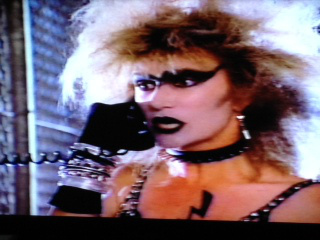 Further exploring her boundaries, De Liso’s wild Manson-style wanna-be, Angel, on an episode of cult television classic Sledge Hammer is a twisted delight. Showing off her dancer’s technique, she fully embodies the soul of punk style revenge with a manic, comic edge.

Detailed dance training also almost led De Liso to some major behind the scenes work, as well. After intensive auditioning, she was hired to body double Shelley Long in a ballet sequence in Outrageous Fortune (1987). But, in a weird bout of Hollywood logic, the sequence was filmed the day after she was on-set, giving her a very nice major motion picture credit – without the actual screen time!

The self produced Lamp Dance (available at convention appearances) does allow her to show off evidence of both her physical and acting prowess. Playing a bookish librarian type who gradually gives into her lust to move to the music, De Liso often is doing two things, physically, at once (giving into the music with one part of her body while restraining herself with another) – resulting in a performance that is a true tour de force.

Never content to remain just one color, De Liso shared stories of her varied career (including thoughts on Iced, a ski slope horror written by The Slumber Party Massacre co-star Joseph Alan Johnson) in Jason Paul Collum’s insightful 2003 look at the world of women in genre filmmaking, Something to Scream About. Her presence here is thoughtful and honest. She even expresses light amusement over the fact that, despite her various accomplishments (including over 70 theatrical productions), that it is the role of Kimberly Clark that she is always recognized for. 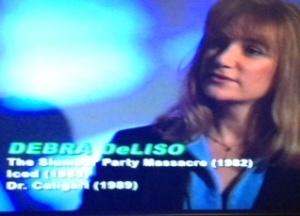 Currently involved with a variety of stage worthy projects, including one heading to NYC in the near future, De Liso’s teaching schedule and other activities are continually updated at http://www.debradeliso.com. Be sure to send some loving in that direction – and….