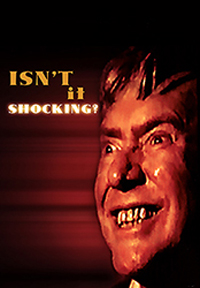 The disgruntled, time biding killers of slasher classics like Prom Night and Terror Train have nothing on the very creepy, incredibly patient Justin Oates of 1973 telefilm Isn’t It Shocking? 45 years after his then girlfriend humiliated him during a naked tumble with another gent, Oates returns to his small home town to enact his revenge – using a jacked out defibrillator that causes quite a jolt!

As enacted by veteran tough guy Edmund O’Brien (DOA, The Killers), Oates is a sweaty, candy inhaling freak. O’Brien’s commitment to this odd creature, ultimately, helps secure Oates’ place as one of the more notable villains of the small screen’s golden age of TV movies.

Working with quaint and quirky charm, director John Badham (Dracula, Blue Thunder) ekes pleasantly effective performances from his entire cast, though. Granted, many of the feature’s older generation end up on the cold end of a slab. But as the beleaguered and bewildered sheriff, Alan Alda cuts a completely sympathetic figure and he blends effortlessly with the perkily unusual energy of Louise Lasser, playing his efficient, crime solving secretary.

Ruth Gordon as the saucy Marge, the last name on the madman’s list, supplies the expected zesty fabulousness, but true pleasures are, also, derived from Dorothy Tristan (Suspended Animation) and Will Geer as a daughter-father doctor team who help Alda and Lasser solve the case. These two are so unexpectedly enjoyable that they almost steal the show from the rest of the very, very fine cast.