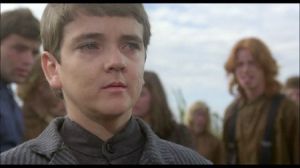 Best known for his roles of Isaac in the original Children of the Corn and Cousin Itt in the popular Addams Family re-imaginings, John Franklin is also an accomplished writer. Along with his writing partner (and first cousin) Tim Sulka, Franklin created the script for Children of the Corn 666: Isaac’s Return, which proved to be a great success for Miramax-Dimension. Now, the two have recently released the first volume of their truly entertaining Sweeney Todd graphic novel reboot, Prime Cuts. Interestingly, the proudly out Franklin acknowledged, post-interview, that he would have gladly revealed his sexuality when plugging Addams Family in the 90s. He was just never asked. Thus, it was a true pleasure to speak with this talented maverick and the equally accomplished Sulka, as evidenced below.

BGHF: How do you two start your writing partnership?

John Franklin: We’re first cousins. We started doing it in high school. We wrote a couple plays for playwriting contests in high school and won first and second place.

Tim Sulka: Then when we were seniors we wrote a murder mystery musical which kind of launched our bigger writing career together. We really liked to work off each other and finish each other’s sentences. When I moved to LA, we started writing sitcom scripts and features. We kept a schedule, everyday, for many, many years.

BGHF: The voices do flow with Prime Cuts. I couldn’t tell who was writing what.

John: That’s nice! We’ve been writing together for a billion years. We do have different styles and we go back and forth and talk about things. But it all just works out fantastically, ultimately.

BGHF: So, how did Children of the Corn 666: Isaac’s Return come about?

John: Well, the original Children of the Corn came out in 1984. My agent was always saying do a sequel, you’re a writer! Finally, they did start making sequels. So, we decided to go in and pitch it. We found out that Miramax-Dimension had the rights. My acting manager had some connections and got us a meeting. We went in and they were like, “OK. We have no other ideas”! They did want to end it with number 6. They thought it was a perfect bookend. Isaac begins number one and ends number 6. So, they killed me off. But it made so much money for them that they cranked out 7 and 8.

Tim: It did really well overseas, too. We would get checks from German sales of Children of the Corn 666.

BGHF: So, what was the inspiration for Prime Cuts? Was it simply a love for Sweeney Todd?

Tim: There seemed to be a plethora of teen movies that were based on other material. We thought there must be a story that we can find that would put a spin on something, becoming a modern retelling. It came to us one day. What if we did a teen Sweeney Todd? No one had done that. We both were fans of the legend and it seemed like a really great idea. We had written Children of the Corn 666, so we wanted to continue in that genre. We wanted something dark, but we are naturally comedy writers. So, we wanted something funny, as well. The idea we had was to take a comedic twist on it. We wrote this, originally, as a screenplay. We took the idea of Sweeney Todd and flipped it around. Our young character became Todd Sweeney.

John: In the original Sweeney Todd, he’s a barber and he shaves people. So, we have our Todd Sweeney just getting out of cosmetology prison. He’s cutting hair and that’s what he’s brilliant at. Then he starts killing people to get revenge.

Tim: We put him in a world where everything was drying up. It’s a very dry, arid place. There’s no meat in the world, so you have to look to other sources to find it. That’s how the whole idea of cannibalism comes into play. It’s set in a strip mall with a pizza parlor next to the salon. The two forces combine and create a new kind of horror.

BGHF: It is darkly campy and I was just constantly surprised. It’s like a great blend of literature and John Waters.

BGHF: It’s a great amalgamation of all that.

Tim: We even thought he would be great to direct it! It would be a great John Waters film or someone like that. Whoever does it would really have to get the humor of it – and the look of it. I think Rob Gutman, the comic’s artist, really captures a new look to it. It’s not anime. It’s not Marvel comic style. It’s got its own look to it. It fits the tone of the piece. You find out in Volume 2 what the revenge is about and why he came back to his hometown of Pure Springs. There’s a certain barber who’s dealing drugs to all the soccer moms in town and he’s got his eyes set on him. There is some blood and gore in volume one, too.

BGHF: How many volumes are you planning?

John: I think Tim was saying that there will eventually be four. Volume one is the first twenty minutes or so of the screenplay. We’re going to keep on pumping them out and make them really look good.

BGHF: Awesome! To jump back to the acting a bit, John, you’ve done so much. Is there a project that you feel has been overlooked that you want to talk about?

John: (Chuckling) There’s a lot of them! There’s a movie I did with Richard Thomas and Beau Bridges called The Christmas Secret. It’s a wonderful Christmas story. I thought it would be a huge Christmas perennial. They don’t even offer it on DVD. I don’t know why. It’s a very bizarre thing. I, also, was in Tower of Terror with Steve Guttenberg. I thought that was going to be a huge thing. They’ve got the ride at Disneyland and Disney World. Granted, the movie still rents – but why it isn’t huge…I don’t know.

BGHF: I guess it’s an unknowable.

BGHF: All kinds of magic!

2 comments on “From Corn to Cuts: Chatting with John Franklin and Tim Sulka”