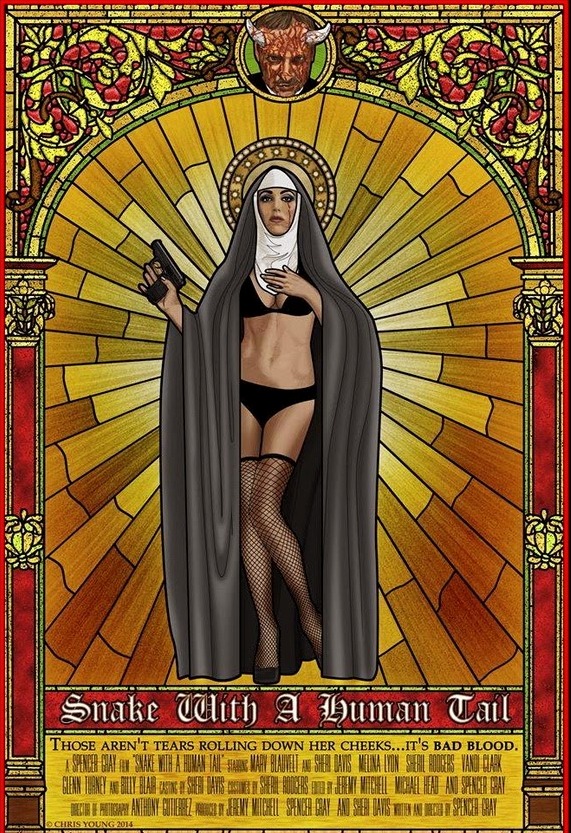 I can list off my favorite monsters for you, quickly: The Wolf Man, Godzilla and the Catholic Church.
Amendment: I kind of loathe the last one, actually.

Thankfully, doing what only the best of exploitation film can do, director-writer Spencer Gray explores the true insidious nature (and the hideous aftereffects) of perverted Catholicism with his attention grabbing short film Snake with a Human Tail. Mixing sharp social observation with gritty atmosphere, Gray shows that there is often no true escape from a corrupted childhood.

Gray fills the screen, visually, with a 70s noir style while encouraging his cast to downplay the story’s outrageous factors with subtlety and restraint. Of course, there is bloodshed here, but the true violence centers around Fulci’s past crimes, an unforgiveable stain.

As Fulci, genre veteran Marv Blauvelt connects with a surprising languidness. While it would have been nice to see an actual transgendered actress in the role of Karma, Shari Davis ultimately earns respect (and sympathy) with her hard nailed vulnerability.

Snake with a Human Tail is, currently, playing the festival circuit. You can keep shedding along with it at:
https://www.facebook.com/snakewithahumantail

One comment on “Review: Snake With A Human Tail”