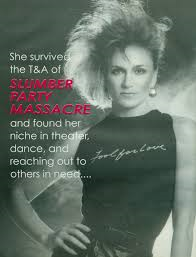 More people have died doing comedy than in any slasher film on record. Thankfully, Slumber Party Massacre veteran Debra De Liso, the force behind dozens (and dozens!) of theatrical productions, knows what she is tangling with when taking on the goddesses of humor.

Along with her glorious co-stars Abbe Kanter and Michael Jaye, De Liso shows off her subtle physical skills and fine sense of timing in the Tyrants of Therapy sketch Mobile Sex Therapy.

Be sure to giggle all the way to De Liso’s website http://www.debradeliso.com, as well.