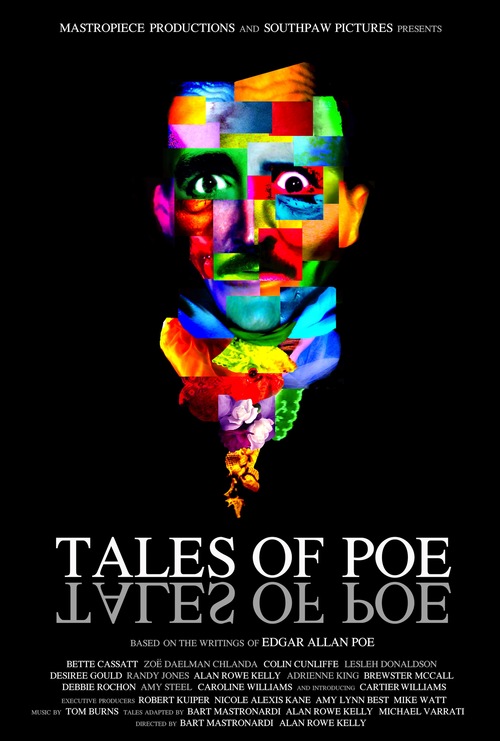 Maverick in its accomplishments, the anthology Tales of Poe is the perfect example of independent terror filmmaking at its most inventive.

Collaborators Alan Rowe Kelly and Bart Mastronardi have mixed old school 50s Gothicism with a distinctively modern spin on two of Poe’s best known tales and one poem here, with intense visuals and some truly superb performances highlighting the affair, as a whole.

In particular, Kelly’s imperial Gogo in The Cask, the second installment, is a marvel of femme majesty. Channeling such vixens as Faith Domergue, Angela Lansbury (who played a couple of wicked noir style villainesses in the 40s) and Joan Bennett, Kelly also adds his own ticks and quirks to this stunning creation, one of the most enjoyable antagonists in recent history.

Kelly is well supported by the surprisingly good Randy Jones (of Village People fame). Playing Gogo’s wealthy, newlywed husband Fortunato, Jones is entirely convincing and completely sympathetic as he discovers that his new spouse has some very poisonous remodeling plans, on their wedding night, no less.

Just like The Tell Tale Heart, the film’s fine, bloody first segment (https://biggayhorrorfan.wordpress.com/2014/08/25/review-the-tell-tale-heart/), The Cask doesn’t skimp on the gruesomeness. If there is one minor flaw it’s that, unlike Tell Tale’s uniformly excellent minor and supporting performances, including David Marancik’s believably unstable Fritz, not all of the performances of Fortunato’s rich acquaintances are quite believable here, with a couple of the performers either delivering too little or too much.

The final piece truly reveals the ingenuity of Mastronardi and Kelly, though. Full of stunning images and fun performances by such genre goddesses as Adrienne King and Caroline Williams, Dreams, a take on a Poe verse, seemingly follows a young woman on her adventures as she hovers between life and death.

Taking up almost a full third of the film’s running time, this (mostly) dialogue-less, stream of conscious segment, may be a bit too much for folks longing for the linear delights of the first two pieces. But illuminated by Amy Steel’s truly wondrous voiceover work and performance as a grieving mother, this portion of the film truly illustrates the risk taking delights of this project, as a whole.

Keep up with Tales of Poe as it engrains itself further into the terror consciousness at https://www.facebook.com/pages/Tales-of-Poe and http://www.talesofpoefilm.com.