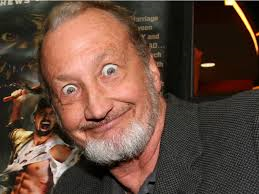 In many ways, the horror film star truly doesn’t get much respect. An actress acquaintance of mine once revealed that local agents refused to see her, despite a healthy bounty of terror movie credits, until she landed a featured role on a more mainstream project.

Despite tremendous success, famed Nightmare on Elm Street fright legend Robert Englund must know her pain. Possessing a full bodied career (with 140 plus credits), including such blockbusters as Freddy Vs. Jason and the television mini-series V, Englund has yet to receive a star on the Hollywood Walk of Fame. The fact that Englund, who started out in the theater, adds such quirky, full bodied flavor to every project that he’s involved in, makes this oversight a true shame.

In 2010, a group of dedicated fans began a petition to rectify this situation. While, as previous sites have noted, a true campaign for this honor would involve the raising of the proper funds ($30,000), this fan tribute could indeed fuel a more legitimate expression of this desire. So, go ahead and sign it. It only takes a moment or two and goodwill and horror are always a glorious combination!

I ALWAYS pick men who are wrong for me, no?!?