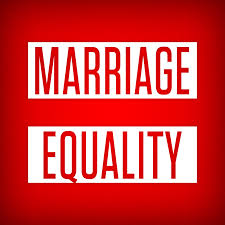 I have to admit that I came late to the marriage equality party. I reluctantly attended rallies for the issue, over the years, and did so more because I felt everyone should have the right to do what they wanted and not over some passionate belief in entering the world of such a seemingly flawed institution.

Frankly, I’ve always loved the notion of queers as outsiders, leather clad rebels and creative rogues. I was worried where our next Klaus Nomi’s and Andy Warhol’s and Quentin Crisp’s would come from if every bent mystic settled down into domestic bliss. I, also, resented the fact that this pretty issue took focus away from such serious queer plights as the growing number of homeless youth and the disfranchising of our aging forebears.

But, things changed a bit when President Obama actually mentioned the GLBT community in his reelection speech in 2012. Being acknowledged, in such a public way, made me feel like I was finally being granted a public significance that I never knew I had longed for. I felt a true sense of joy and it seemed like Dylan’s 60s proclamation was finally coming true for those who lived their lives within a tinge of pink – the times truly were changing.

Then when Illinois, the state I am based in, passed its own Marriage Equality Law, I was, once again, surprised at the happiness I felt. I still often, inwardly, shudder at the thought of being bound completely to one person. But, now I catch myself musing, absent mindedly, as I leave the gym with thoughts of some tattooed stud I’ve just seen dancing through my head, “Hey, I could marry him now.”

I, finally, got it with yesterday’s SCOTUS ruling, though. It’s not about marriage or straight institutions or the ultimate possibility of trial separations or having to deal with divorce. It truly is about a community of people being considered full human beings, not above or below, but equal to everybody else. It’s crazy how long it took me to realize that. Importantly, I, also, see how excited my punk rock buddies and horror loving kin are about this issue and realize that the GLBT community can never be completely homogenized. What a relief!

But, I firmly believe, now that we have even focus, it’s not the time to rest. It’s truly time to start working on some of those less pleasant realities…violence against our trans brother and sisters and the hatred expressed towards our immigrant populations… and to prepare for those (sure to come) attacks from the right!

Are you with me?