Without a doubt, Linnea Quigley is the Queen of Scream. With major credits in contemporary horror classics (The Return of the Living Dead, Night of the Demons), seminal slashers (Silent Night, Deadly Night, Graduation Day), exploitation gems (Savage Streets), mainstream terror (Innocent Blood, A Nightmare on Elm Street 4) and late night cable screamers (Hollywood Chainsaw Hookers, Creepozoids, Sorority Babes in the Slimeball Bowl-O-Rama), her status as the crown princess of the macabre is pretty much impeachable. Those who have been lucky enough to meet her on the convention circuit can, also, assert that she is one of the nicest, most down-to-earth personalities out there, as well. Here, promoting her two appearances in Chicago this weekend, one at Alley Cat Comics on Friday and the other at the Vic Theatre on Saturday (as a celebration of Return’s 30th Anniversary), Quigley’s fun loving personality takes center stage as she talks about Return’s legacy and, as a confirmed horror buff herself, some of her favorite films.

BGHF: Trash…Spider…Suzanne…You’ve certainly played some kick ass women in the field of horror! Do you have personal favorites? Linnea: Well, Spider from Sorority Babes, of course. That was my first major role, I thought, as a woman in power. Then the next one, of course, was Trash. I thought she was powerful in her own way. I think the character knew what she was doing and was kind of controlling people. Those are my favorites. In Night of the Demons, the demon controlled us. But Suzanne, herself, was powerful – (Laughs) although, a bit dysfunctional about boys.

I think Suzanne is one of the most brilliant creations in 80s horror! I know you were reluctant to accept the part because you didn’t want to play a teenager when you were in your mid-20s. But you make her extremely fun and believable, while, also, seemingly using her to comment on the stereotypical nature of the role, as well. That duality is probably something that you did unknowingly, but I think it’s a stunning performance. Oh, that’s interesting! Thank you! I was thinking, Oh my God! Can I pull off a teenager? I was a little bit afraid to do that. Then I thought, Okay, I’ll just make it fun! 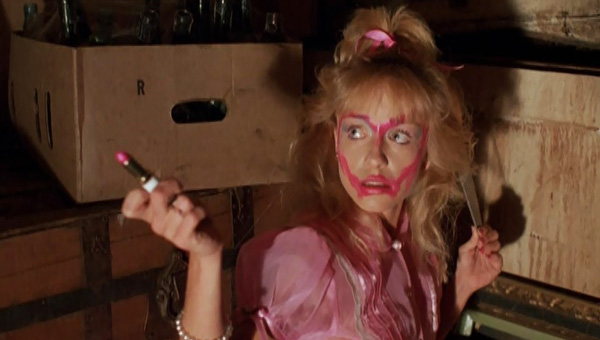 Night of the Demons has been remade. The Return of the Living Dead has an amazing number of sequels. (Laughs) I know!

How would you feel if they re-imagined the original, though? I think that would upset me. I feel like those characters were created, purely. It wasn’t done to make money or to make another summer blockbuster. Everything was aligned when we made that movie. I don’t think they could replicate that. I really don’t. The only other remake that I’ve seen that I’ve liked is The Crazies. For the most part, I haven’t seen anything where I went, Wow!

You’re a true horror fan. They’re going to be showing Texas Chainsaw Massacre at the 30th Anniversary celebration of Return at The Vic, as well. That’s one of your favorites, correct? Yes! Oh, yes!

There’s a story you’ve told that I love. You took a boyfriend to see it at the drive-in and he couldn’t take it. No, he couldn’t! He was like, Take me home! Take me home! It was my girlfriend and I. The two of us had seen it before, somehow. We wanted to go see it, again. So, we go there and he’s freaking out a lot and, obviously, couldn’t handle it. He was like, No, no! I can’t take it. I was just mad. Luckily, it wasn’t a big drive. We drove him back to where he lived. My girlfriend and I then went back and watched the rest of it.

Was that the last date? Yeah, kind of! (Laughs) You’d think he’d just conceal his fright. The film is scary and unnerving. But he had to have been around 21 or 22.

What are some of your other favorite horror films? Well, Jaws, I always put first because it scares me so bad. Most of Alfred Hitchcock’s stuff, as well. Rear Window is one that I really like. When I watch it now, it’s not as intense. But when I watched it as a kid, it was cool.

What a great cast! Jimmy Stewart, Grace Kelly… …and the woman who played his maid! What a great actress.

Yes. Thelma… I can’t think of her name.

It’s on the tip of my tongue. Thelma Ritter! I just watched her in All About Eve on Thanksgiving! Yes! She was in big movies, but she’s one that you go, Now what was her name? Another one that is scary to me, on a lot of levels, is Hush, Hush, Sweet Charlotte with Bette Davis. That one just creeps me out. It’s not made to be horror really, but it is. It’s kind of in the vein of Sunset Boulevard. The stuff she’s doing is horrifying and it affects you – or most people it does! Of course, there is always What Ever Happened to Baby Jane? with Bette Davis, as well. H-m-m-m…There is another one that I love with Robert…is it Robert Mitchum? He was a killer with HATE tattooed on his hand and he goes after these kids. He’s yelling, Children! He killed the mom.

That’s Night of the Hunter! Yeah, that’s it. That’s it! I always forget the name of that. That movie creeped me out. I remember her (actress Shelly Winters) hair flowing in the car when she drowned. That was like — (Erupting into a famous Linnea Quigley scream) —- A-H-H-H-H-H!

I love that one, too! That was directed by character actor, Charles Laughton. It was the only film he directed, actually. Really!?! He did a great job! I just like that movie a lot.

They tried to make that into a musical. (Bewildered) Um-m-m…

I don’t think it was too successful. No. I can’t see that being too successful. (Singing, impromptu) Oh, I’ve got to get away from this man, he’s gonna kill me! That would be weird! They turn too many things into musicals! It’s frightening.

They made Rocky into a Broadway musical. It ran for awhile. What?

I do know people who enjoyed it. No! Oh my god, that’s incredibly weird!

Maybe it was an anniversary thing. Speaking of which, I’m sure it still shocks and surprises you how beloved Return is. Yeah. When we did it, we thought it was just going to be another horror film. In fact, with the zombies…we were looking at the actors in make-up and thinking that they weren’t very scary. To us, they were just fellow performers, goofing around in their costumes. Besides, when you’re doing it, you don’t look at it from that perspective. So, it’s been a shock.

…and with you, shooting for days in the rain as Trash, you’re probably thinking about being cold and getting sick. Yeah! (Laughs) I definitely thought about stuff like that!

How long was the shoot, itself? It was 5 weeks, I believe, with some pick-up days. One of the pick-up days involved putting the prosthetic mouth on me again! I was like, No!! It was when I bite the cop who is calling out. The zombies come running out and I bite him in the brain. It’s like a two second shot.

In Night of the Demons you got lucky, though, and convinced them not to put you in Suzanne’s demon make-up again for one of the shooting days. That was a really good coup of mine! I thought that they weren’t going to fall for it. Sometimes the directors don’t want to hear from the talent. They’re like, yeah, whatever. But I was shocked that they went for it and thought it was a great idea. I was really reasoning, though: It’s going to appear much more frightening if she appears as herself again. It means they can change! (Laughs) Kevin thinks about it and is like: Yeah, let’s do it. That’s a good idea. Of course, now he knows of my trickery.

That’s the strange dichotomy of these films. There are so many powerful female roles – even more so, I believe, than in mainstream films. But there are so many exploitative elements as well – nudity, intense victimization. Back then that was the formula. It was like if you didn’t have something like that in the movie, the production company wouldn’t buy it. They had their formulas and that’s what they went by. They had to have blood, boobs and guts. They always had the nice one surviving and the bad one dying.

Do you think it’s changed nowadays? Yeah! It’s changed a lot. I’m trying to think of a good example. Maybe the Saw series? At least with that, each character, particularly some of the women, had stories. One was a heroin addict, one was this, and one was that…It made a little more sense. There was a little more variety. It wasn’t so black and white.

The men, as far as I can recall, are abused just as much as the female characters in those films, as well. …Sometimes even more so. I hate those horror films where the guys get shot in the head then the women are tortured for half the film. Yeah, don’t make it just the women. I definitely agree with you on that! Equality!

Be sure to celebrate equality, the holidays and The Return of the Living Dead’s 30th anniversary this weekend in Chicago with Linnea! Alley Cat’s Horror Holiday Party with Linnea begins at 8 on Friday, the 11th. Tickets are $10 and include a free autograph from Linnea. More information is available at https://www.facebook.com/events/1526410034348980/. Doors open at 6, the next night, for the Anniversary celebration. Tickets are $12 (pre-sale) and $15 (at the door) and include screenings of Return, Texas Chainsaw Massacre, Turbo Kid and Tales from the Crypt: Demon Knight. Photos and autographs (on your items) with Linnea are free. You can visit the official Facebook page for the event at https://www.facebook.com/events/1652092685061873/.

Be sure to visit Linnea at http://www.linnea-quigley.com/, as well!