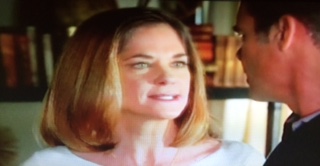 DaPaiva delivered on a recent Castle episode, as well!

What could be better than a hurtling eyeball in the mouth? Well, probably not much. But Kassie DePaiva, whose spunky Bobby Joe in the seminal Evil Dead II suffered such a fate, has just been nominated for a Daytime Emmy for her work as the tragedy strewn Eve on Days of Our Lives. I imagine that honor has to rank pretty high up there, as well!

Indeed, DePaiva, whose other terror credits include 2013’s We Are What We Are, imbued all her storylines from her year and a half run on the show with an honest emotionality and sharp sense of the dramatic. Thus, this industry recognized honor is much deserved.

Nicely, the gorgeous True O’Brien, whom played Eve’s sensitive daughter Paige, was also nominated for her work, as well, in the Younger Actress category. Indeed, the fallout from the reveal of Eve’s affair with Paige’s boyfriend during the spring of 2015 was some of the best entertainment that the 50 year old soap had offered in awhile and kept ardent viewers glued to their television screens.

This year’s Daytime Emmy’s will occur on Sunday, May 1st. Here’s hoping that DePaiva and O’Brien take home the gold!

Be sure to check out http://www.kassiedepaiva.com and https://www.facebook.com/kassie.depaiva, as well.