The leather lesbian nuns who raised me buried many a thing in that veiny backyard, behind our dungeon, as I grew up. But, I tell you every single one of those priests (and unrepentant Republican house speakers) truly deserved it!

The poor lady that Olivia de Havilland’s regal yet extremely frazzled Laura Wynant discovers submerged in the dirt in 1972’s The Screaming Woman definitely isn’t worthy of her fate, though. Left for dead by her cheating husband, this beleaguered lass has just hours to live and only the discredited Wynant can save her. 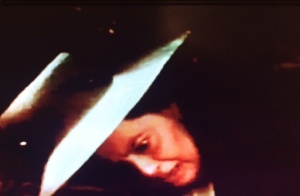 As luck would (or wouldn’t) have it, the fragile Wynant has just recovered from a nervous breakdown and no one, including her loving son and a couple of kindly, longtime friends, believe her when she claims that she’s heard a woman moaning in the soil. A frantic race through the neighborhood uncovers only more derision and, in one of the telefilm’s tensest scenes, the arthritic Wynant even finds herself in the home of the very agitated wanna-be killer. Of course, Wynant’s venomous daughter-in-law Caroline, played with smooth iciness by Laraine Stephens, is pleased as punch about her mother-in-law’s apparent delusions as asylum doors slam and dollar signs dance, merrily, in her head.

But Wynant, played with moxie and bravado by de Havilland, is nobody’s fool as Caroline and the killer, played with patriarchal sleaziness by genre stalwart Ed Nelson (Night of the Blood Beast, The Brain Eaters, A Bucket of Blood), soon discover. De Havilland’s anguished shriek (spoiler alert!) upon eventually rescuing the woman helped provide ‘70s television viewers with a potent shock and emphasizes the fact that this Oscar winning pro was an actress, through and through, no matter the circumstances or the part. In fact, The Screaming Woman’s prime pleasure is in watching de Havilland, passionately, submitting herself to the various indignities and insults that Wynant endures throughout this brisk exercise.

Interestingly, this effective Ray Bradbury tale was remade in 1986 with a 10 year old Drew Barrymore replacing de Havilland as the doubted party.