Even if I could go home again…I wouldn’t want to. Although, expanding the population there from 600 to 601 might be quite the achievement.

Thankfully, for gore loving comic adventurers, the young and handsome Todd does return to Pure Springs, the place of his birth, after years of being locked away in a cosmetology prison, in Prime Cuts, a delightfully eccentric graphic event. Settling in behind a pizzeria filled with low life hoods and electric degenerates, Todd is determined to revenge himself and his family, a la Sweeney Todd. With an accidental murder setting the final tone for the first volume, the recently released second installment gives a bit more background to Electra, Todd’s calculating partner in crime, and proves, beyond a doubt, that gastronomy can truly be orgasmic. 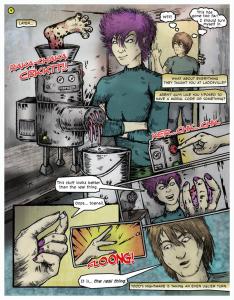 Scripted with wicked verve and a true sense of fun by John Franklin and Tim Sulka, this arc finds Electra and Todd grinding up his first victim while dealing with a sexually ambiguous food inspector and the erotic eccentricities of Pure Springs’ motley residents. Of course, victim number one soon finds his way onto the pizzas as a very special topping and, in the story’s most satisfying comical sequence, sends everyone into a throes of unexpected pleasure. Such detailed outrageousness makes for a world that would have fit, perfectly, on the screens of New York City’s legendary grindhouse theaters and allows one to almost feel the denizens of the Bowery breathing on your skin.

Thankfully, artist Stan Maksun perfectly captures this world with a lean, punk energy. His artwork feels like graffiti warfare and he even throws in a fun nod to the film career of Franklin, a successful actor who embodied Cousin Itt in the early ‘90s The Addams Family films, but is probably best known for his legendarily chilling work as Isaac in the Children of the Corn series.

Prime Cuts (vol. 1 & 2) is available for sale in print and download at www.IndyPlanet.com. For a free download of Volume 1, visit www.primecutsnovel.com.