Written in completely different styles and featuring authors who arrive at their writing points from much different backgrounds, the memoirs of Siân Phillips (The Doctor and the Devils, Hammer House of Horror) and Sharon Farrell (It’s Alive, Night of the Comet) still manage to broker in the much of the same emotional currency and definitely illustrate how it is still the men in society who continue to steadily manipulate the fates of those around them.

A prodigiously talented theater actress, Wales bred Phillips details her courtship and years of marriage to Peter O’Toole in Public Places, which was first published in the United States in 2003. While Phillips engaged, successfully, in a performing arts career, O’Toole, obviously, was the more famous of the two, reaching a worldwide platform with Lawrence of Arabia. He also definitely, as evenly and poetically described by Phillips, controlled the many specifics of their lives together. Fairly, Phillips often revels in the adventures she experienced while visiting O’Toole on his various film sets and, lovingly, describes a remote home on a mountain that she, painstakingly, created for him and their two daughters.

Phillips also shares stories of such legends as Katharine Hepburn, who frightened her children by vehemently suggesting that they should become something useful like plumbers, and My Fair Lady’s pompous Rex Harrison. Harrison, known for his misogynistic temper, is painted truthfully here and Phillips shows grace and courage when explaining how she mastered his moods while performing on stage with him.

In deep contrast to Phillips’ artfully measured tones, Farrell’s “Hollywood Princess” From Sioux City, Iowa is a messy and rambunctious offering, often filled with grammatical errors and with the names of famous participants misspelled. Yet, with pluck and little sense of bitterness, the actress traces her career which was often sidetracked by affairs, a miscarriage, rape, medical issues and mismanagement.

As with Phillips’ offering, Farrell’s honestly reveals how the males in power, here in LA (and beyond), frequently, shaped her destiny – from the unstableness of Hawaii Five-O’s Jack Lord to the peculiarities of Bill Bell, the creator of the popular soap The Young and the Restless. Farrell frequently found herself jobless due to their whims and when, onset, was subjected to unprofessionally bizarre behavior – prime examples being Dennis Hooper peeing on her while filming Out of Blue and a physical attack from a fellow performer on the location of The Reivers.

Still, Farrell, who suffers from bi-polar disorder, is often hardest on herself here and she acknowledges her own responsibility in many of the choices that she made. She is full of passion and heart and, despite the lack of editing, often sets up a nice sense of atmosphere and sense of time and place even when her viewpoint rambles some. 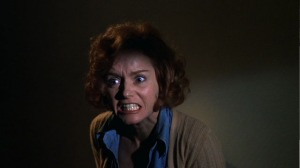 Unfortunately, neither actress concentrates much on their genre offerings here. Phillips does, happily, describe her interesting audition for David Lynch’s Dune and Farrell gives passing mention to such projects as The Premonition and The Fifth Floor. But, what is most poignant and interesting about each book, is the conclusion that readers can draw about society, itself. It is still a straight man’s world, as plainly evidenced in both writers’ circumstances. Here, they show how they overcame and thrived despite that sometimes overpowering obstacle.

Public Places is available, on sale, from various dealers on Amazon. Farrell’s tome, meanwhile, can be purchased from her at www.sharonfarrell.com.

(Images of are Phillips in Hammer House of Horror and Farrell in It’s Alive.)