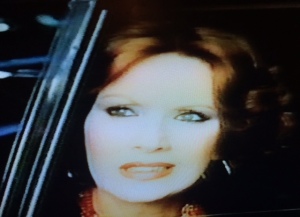 (Hell of a Gal explores the films of the ever luscious Euro Vixen Helga Liné.)

Mother Earth or mother of Daniel Greene…the stupendous Helga Liné is fit to play them all. Of course, in 1985’s Pulsebeat, a gloriously goofy Perfect take-off, she plays the latter with cool ease and directness.

Naturally, the big joke (of sorts) here is that Liné, at 53, is still gorgeous enough to be confused as the younger, muscular Greene’s ex-lover. The scriptwriters definitely spend the first half of the film leading the audience in that direction as Liné’s conniving Marlene tries to undermine the smooth and juicy Roger (Greene), her former employee, as he attempts to save his health club from certain extinction. Of course, Mama Bear is just lonely…and controlling…and wants her son at her side to help run her own oasis of perfection.

But by the time the two rival clubs are competing against each other in the film’s climatic, unconvincingly strenuous National Aerobithon, Marlene reveals a bulging pair of maternal instincts and urges her flesh and blood onto victory, despite her own business interests.

Unfortunately, sticking to the tried and true, the film, disappointingly yet unsurprisingly, does focus on Marlene’s physical upkeep with Roger, at one point, calling her “embalmed” and warning her about “her face cracking”. Granted this is a silly comedy, but these moments do stick out as another indication of how women, particularly those of a certain age, are viewed in society. Funnily, here, it almost comes off as ironic, as everyone involved treats Roger’s almost freakishly large muscles and slavish devotion to his body as a normal state of being while a middle aged woman’s attempts to grow older, gracefully, are treated with contempt. Thankfully, Liné, like every woman of grace and power, wears the insults well. 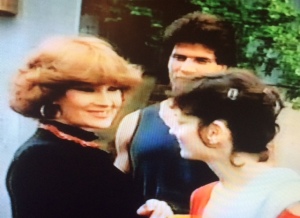