Murderous ghouls in horror films can get away with almost anything…stabbings…beheadings…castrations. But stealing someone’s bag of candy? Well, then they may just have some serious retaliation on their hands. The dynamic resurrected killers in Justin Seaman’s ambitiously fun The Barn discover this the hard way when the film’s determined hero Sam and Josh, his plucky best friend, come after them to retrieve their purloined goods. Oh, and of course, to avenge their friends’ deaths and bring a halt to the dreaded Feeding which is sure to cause world doom. 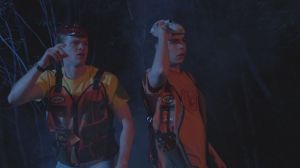 But this visceral adventure is also a wake-up call for the youthful Sam (an effective Mitchell Musolino), who is full of holiday pranks and addicted to mindless diversions. Chastened into public service, after a joke-gone-wrong, the resourceful Sam eventually figures out a way to do his good deed while on a road trip to see his favorite metal band. Unfortunately, he and his friends stumble upon a remote barn and unleash a trio of monstrous entities that soon lay siege to their bodies and to a small town’s Halloween celebration. Therefore, it is up to Sam to embrace his imminent adulthood and try to save the day with Josh’s (the engaging Will Stout) assistance.

Adding greatly to the film’s throwback appeal, writer-director Seaman luxuriates in some memorable killers and some epic set pieces here. His terrible trio, The Boogeyman, The Candycorn Scarecrow and Hallowed Jack, drip with a satanic moodiness and are far creepier than many of the killers that populated the incredible number of imitative slashers that hit the video shelves in the mid to late 80s. A bloodbath at a local dancehall is also amazingly well choreographed by the multi-hyphenate and brings to mind projects as diverse as Brian DePalma’s Carrie and Joel Schumacher’s The Lost Boys.

Cameo appearances by Friday the 13th’s Ari Lehman and Linnea Quigley, America’s true goddess of horror, add to the movie’s appeal, as well. In particular, it is fun to watch Quigley, who played saucy victims in such memorable titles as Graduation Day and Night of the Demons, as she does a creative 180. Here, like in her effective turn in Full Moon’s Trophy Heads, she plays an uptight religious matron, the source of Sam’s initial downfall. With a sly sense of humor and a soft authority, she gives the production its star power – something that, given the artistry involved here, wasn’t necessarily needed for the project, but does provide a nice bonus for true fans of the genre.

The Barn (and its related goodies) is available for purchase at www.thebarnmerch.com. More information is available at https://www.facebook.com/TheBarnmovie, as well.