Our childhood vacations consisted of being captured, destination bound, as our parents’ arguments descended into sharp silence…and of my frustrated father stopping, unabated during the night, at points we were warned to avoid. Therefore, my siblings and I met various nervous fingered drug addicts and opposite gendered strangers sitting in the sinks of McDonalds restaurants on our morning adventures. But…we were relatively unharmed.

The saucy quintet that ventures onto an isolated island for a reunion-vacation in the Aaron Spelling produced Five Desperate Women (1971) isn’t so lucky, though. A crazed inmate has escaped and is posing as either the awkward company boat captain or the island’s attractive yet mysterious handy man. As the former collegiates reconnect and tell tall tales of career successes and nonexistent families, the island’s loveable mutt is murdered and soon one of the distressed sorority sisters meets a similarly unpleasant fate, as well. The remaining friends must figure out who the killer really is and fight for survival until help arrives. 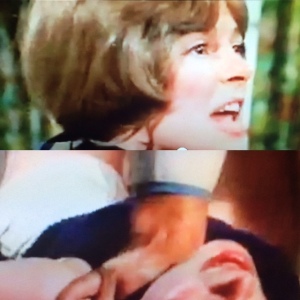 Riding high on soap opera antics and mild slasher film esthetics, this telefilm is definitely a showcase for the beauty of Stephanie Powers, who portrayed determined heroines in such Hammer outings as Die, Die, My Darling and Crescendo. Here, she is allowed to branch out into unsympathetic territory. Nicely, this former Girl from U.N.C.L.E. brings an arctic reserve to Gloria, an often shallow and petty character. Powers, simply and effectively, delivers Gloria’s disdain for the weaknesses of her companions in haughty sidelong glances and long, cool puffs of cigarette smoke.  The other women are given a bit more background history, but this is Powers’ show and she runs with it.

Gloria’s fellow cohorts, meanwhile, include Lucy (Anjanette Comer), a well-to-do alcoholic, Dorian (Joan Hackett), an insecure animal lover whose fantasies are her ultimate undoing, Mary Grace (Julie Sommars), a tender soul being held emotionally captive by her invalid mother and the intelligent and determined Joy (Denise Nicholas). Unfortunately, in a wildly politically incorrect move, Joy, the sole black woman of the group reveals, in a bizarrely detailed monologue, that she has blown all her educational and career opportunities through some sort of nonchalance and emotional disregard, to settle for the life of a high class prostitute. There is an interesting Tennessee Williams vibe to the exchange and Nicholas fills it with a coat of truthful bitterness and resolve, finding honesty where another may have just filled it with the anger of a minority actress forced to play another lady of the night. Equally strange, yet not as troubling, is an early scene with Mary Grace and her mother. In a weird twist, the mother communicates only through her nurse who determines what she is thinking through glances and then relays their intent to Mary Grace. It’s a strange and unsettling bit that fills this piece with a bit more artiness and presence than your run of the mill made for television affair.

In addition to this potent moment, director Ted Post, whose other credits include Magnum Force, Beneath the Planet of the Apes and the cult classic The Baby (also with Comer), keeps things moving along nicely and even manages to build suspense as to which of the two men is the killing kind. Both could, seemingly, be the one and Bradford Dillman brings a nervy edge to his seafaring sort while Robert Conrad allows cracks to appear beneath the façade of his handsome and reliable jack of all trades. 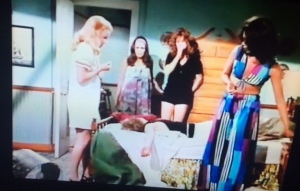 Post also handles all the dramatics with a seasoned flair. Particularly enjoyable is a series of scenes where the sodden and hysterical Lucy, collapsed in despair, reveals the details of her unhappy day-to-day existence. The understanding that palpitates from her comrades eventually aids in the believability of the Lord of the Flies denouement that finds the surviving women launching out against their attacker in a choreographed frenzy. Moments like these make this flawed yet truly enjoyable adventure a memorable…and violent one. H-m-m-m… I guess my youthful sojourns weren’t so bad, after all.