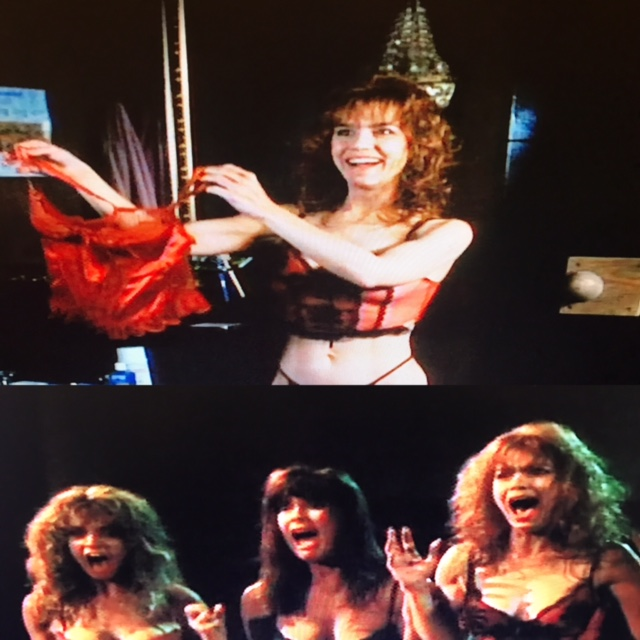 Freddy, Jason and Michael may get the lion’s share of horror loving, but the thing that I have always loved about the terror genre is how it has given women such a fertile ground to explore multiple characters. Even when the odds are against them and extremely exploitative elements present themselves as hindrances, strong portrayals can emerge.

Such is the case of Hard to Die which, if the world is fair, will one day be acknowledged as the Queen Mother of All B-Movies. Featuring a bevy of beauties who lit up the screens in a plethora of grindhouse projects, this Roger Corman produced quickie allows the (admittedly) scantily clad heroines to exert themselves in Amazonian manners. Here Deborah Dutch (Graduation Day, Sorority Babes and the Creature from Hell), Melissa Moore (Sorority House Massacre 2, Repossessed, The Invisible Maniac), Toni Naples (Death Stalker 2, Dinosaur Island), Karen Mayo Chandler (Stripped to Kill 2, Out of the Dark), Gail Harris (Curse of the Komodo, Forbidden Games), Monique Gabrielle (The Return of the Swamp Thing, Transylvania Twist) and Kelli Maroney (Night of the Comet, Chopping Mall) are featured in tale about a group of hard working retail princesses whose late night inventory shift turns into a deadly game of survival. After opening up an ancient text, the beauties soon find themselves either being possessed by an evil spirit or finding Rambo-like sensibilities within themselves as they take down their out of control colleagues. This gives the actresses plenty of emotions to play with – fear, rage and, finally, exhausted triumph. Tying into Slumber Party Massacre, another Corman property, through flashback sequences and the reuse of the Sorority House Massacre 2 character of Orville Ketchum, a scary looking yet sympathetic foil played with beleaguered dignity by Peter Spellos, adds many levels of genre joy to the film, as well.

Nicely, Midwest residents will get to catch a free screening of this micro epic on Saturday, August 5th at AlleyCat Comics, 5304 N. Clark, in Chicago. Dutch, who will be in town filming scenes for the sequel to her beloved The Hollywood Warrioress project, will be in attendance, talking about the film and taking photos and signing memorabilia for fans. Therefore, if you haven’t seen the film before, this will be a truly unique way to experience it for the first time.

Hope to see you there!