Before performing matriarchal duties on Sunday night melodramas…before the Academy Award wins, the diverse Sally Field logged in some final girl duties in the 1972 made for television Christmas horror Home for the Holidays. Here, Field was joined by a powerhouse cast – Julie Harris, Jill Haworth, Eleanor Parker and Jessica Walter – and, nicely, came out ahead of the curve against the film’s tempest tossed, pitchfork yielding maniac. 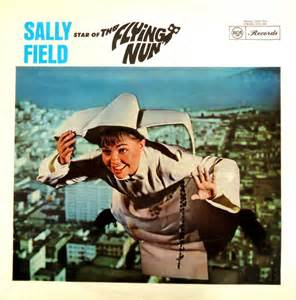 Of course media fetishists know that, at the beginning of her career, Field essayed a couple short lived, yet iconic characters – Gidget and The Flying Nun. Interestingly, while playing the sky bound Sister Bertrille, she even released an album, Sally Field, Star of The Flying Nun. Supposedly aiming for the heights of Julie Andrews, this offering actually lands in that sweet, silly fun spot of most celebrity recordings. Although, wouldn’t be nice if it was true that we always got braver as our voices grew louder?