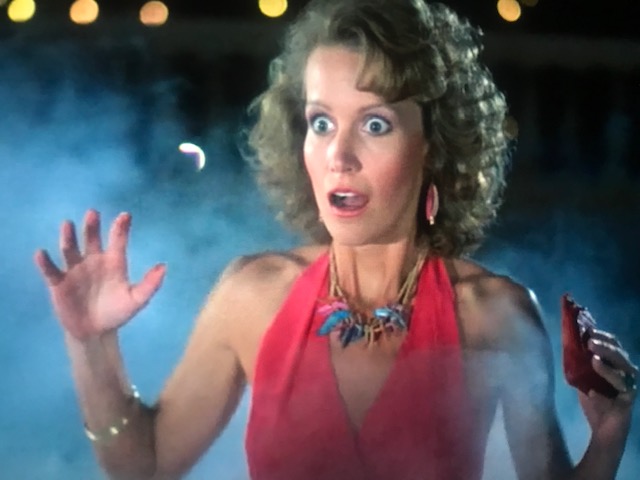 My friends Kirsten and Bryan are in the process of making these multi layered candles. In every level, they bury a surprise trinket. As the wax melts, the treat emerges. For me, certain movies contain these kinds of unique gifts, as well. Utilizing my online media memberships for maximum benefit on a recent vacation, I dove into the low budget latter day oeuvre of Eric Roberts and several lurid television films of the exploitation genre. Upon viewing 1985’s Terror at the London Bridge (AKA Bridge Across Time), I anticipated the participation of such performers as Adrienne Barbeau and Rose Marie from the opening credits. But my little unexpected nugget of delight was the unanticipated appearance of actress Barbara Bingham. 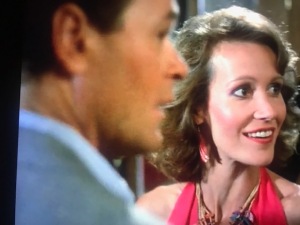 Here Bingham, best known to terror enthusiasts as the kind Ms. Van Deusen in Friday the 13th Part 8: Jason Takes Manhattan, appears as Alice Williamson, a wealthy traveler who soon finds that her adventurousness will lead to a bloody end. An accident, as she traipses across the restored London Bridge in a tourist town in Arizona, puts her face to face with the resurrected Jack the Ripper. Nicely, Bingham radiates with a warm presence in her early scenes while providing the requisite terror in her final moments onscreen. Therefore, it is a shame that, despite lead roles in other genre projects such as Claudio Fragasso’s Beyond Darkness, she didn’t go on to become a bigger name in the entertainment industry.

Still, with an eye on longevity (which is certainly the most important thing to a performer), Bingham has become a commercial force in Australia, appearing in numerous ads and pictorials. More info on her career is available at https://barbarabingham.com/.