In his eclectic life, George Maharis has been a television actor, a singer, a Playgirl model and a celebrity whose homosexuality was publicly rumored at in a bygone era. In 1977’s SST: Death Flight, one of the many television films made in the wake of the popularity of the Airport series and such disaster flicks as The Towering Inferno, he also plays Les Phillips, a disgruntled engineer who sabotages a new-fangled high-powered aircraft. To make matters worse, a doctor played by the distinguished Brock Peters, who gamely played gay in the 1962 British drama The L Shaped Room, has brought a sample of a toxic flu onboard. Due to Les’s machinations, the virus is leaked and the deadly traumas facing the varied cast are doubled. 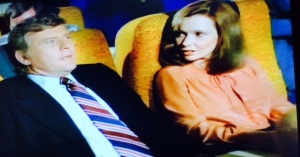 Besides Maharis, such boob tube stalwarts as Martin Milner, Bert Convy, (the notoriously closeted) Robert Reed and Lorne Greene appear here. Early appearances are also logged in by Billy Crystal as a kindly flight attendant and John De Lancie as a one part of a young couple. Of course, Broadway baby Susan Strasberg, whose genre credits include The Manitou, Bloody Birthday and Sweet Sixteen, brings taut nobility to the proceedings while a sexy stewardess, played with feminine focus by Tina Louise, reacts sensitively to the possibility of a renewed romance.

The best soap opera plotline here, though, involves Hee Haw’s baby voiced Misty Rowe, who also appeared in such schlock as Meatballs II, Goodbye, Norma Jean and Double Exposure, and Convy, who must decide whether to keep the child she is carrying. The womanizing Tim Vernon (Convy) doesn’t want to settle down while the softly determined Angela (Rowe) hopes to change his mind.

Will facing near extinction make Tim-Convy appreciate the glories of new life? Will Les-George pay for his sins? Will disaster stalwart Burgess Meredith steal the show from all the other performers with his wrinkly antics?