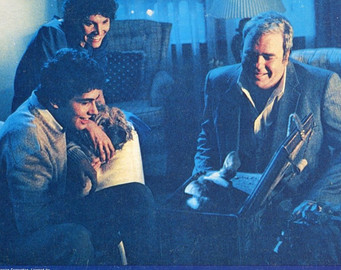 Decades before he entered an entire generation’s collective heart as the slightly flummoxed American benefactor of Gizmo in Gremlins, Hoyt Axton was already hanging out with the cool kids. His mother, Mae Boren Axton, was the co-writer of the popular Elvis number Heartbreak Hotel and, as a beloved songwriter and singer in his own right, his songs were covered by such personalities as Cher, Joan Baez, Arlo Guthrie and Three Dog Night.

Axton, whose other horror credits include Retribution and Buried Alive, was even joined by Linda Ronstadt on the beautiful and heart breaking Lion in the Winter, which was featured on his popular 1975 A & M album, Southbound.

Pretty enough to make a Mogwai cry, no?