You can’t blame me for wanting to stick to a game of Go Fish after watching writer-director John Wesley Norton’s Spades. It may not be as much of a thrill ride, but it would be decidedly less bloody.

This violent noir-like crime meditation opens with a quartet of tough guys playing the titular card game. Skillfully, Norton eventually reveals that something more sinister is at play here. It turns out these criminals-for-hire have kidnapped a young girl and her friends and are waiting for the right time to take the action into high gear. Back stories are revealed and soon double crosses, murky motivations and sexual violence are placed, firmly, on the menu. As the gang’s intended target finally arrives, lives are lost and the quiet Sims (a truly fine and subtly menacing Thomas A. Jackson) reveals one final, truly brutal plot twist.

Here Norton works especially well with his skilled cast and grooms sophisticated performances out of such veteran television and film performers as Alex Skuby, Xango Henry and Juan Riedinger whom play the three other intruders. Equally fine are indie scream queens Deneen Melody (As Night Falls, III Slices of Life) and Heather Dorff (Hole in the Wall) whom are not only beautiful, but bring as much sensitivity and versatility as possible to their roles of the piece’s primary victims. 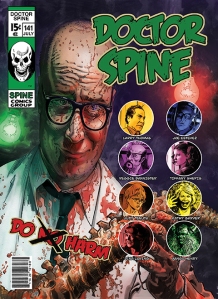 I know a couple of masochists who actually enjoy going to the chiropractor. For those who find bone cracking to be a bit more disturbing, though, writer-director John Wesley Norton has created the fun horror-comedy Doctor Spine.

Styled after the old EC comics, this lurid adventure follows Joe Spine, a mild mannered chiropractor, whose personality is split between his dead, truly demented father and Patch Castle, the villain from a series of childhood books, after a therapy session goes bad. Soon his father is controlling the day and there isn’t a slightly crooked psychologist or sexy dame in sight who is safe from Joe’s fatal fingers. It is only the love of Spine’s most devoted patient, Mindy, that could possibly restore the normally soft spoken healer to his former virtuousness.

Nicely, Norton frames and colors the action as if it were part of the fantastic cartoons that inspired him. The standout of the production, though, is its fantastic genre cast, who all turn in top notch performances. As expected, scream queen Tiffany Shepis, who provides the film’s penultimate shock piece, and The Addams Family’s Lisa Loring apply energetic sass as various seductresses in the doctor’s life. Comedian Judy Tenuta, Seinfeld ’s Larry Thomas, 60s TV favorite Kathy Garver and up and coming character actress Colleen Elizabeth Miller, also, supply moments of frothy fun. But it is Phantasm’s Reggie Bannister and indie exploitation king Joe Estevez, as Castle and Spine Sr., who bring the most to the table. Estevez, in particular, provides a smoothly wicked, truly accomplished turn here.

Most importantly, while some of the exposition scenes could have benefited from the zany goriness that dominates the film’s final third, actor Michael Wexler’s take on the title character is always engaging. He takes viewers through the various scenarios with skilled underhandedness, adding both tender heart and subtle mania to Norton’s admirable creation.

Unfortunately, on December 12th, 2015, mere days after his 52nd birthday, Wexler was hit by car and killed. Thus, this film stands not only as a testament to his talent, but as an accomplished memoriam as well.