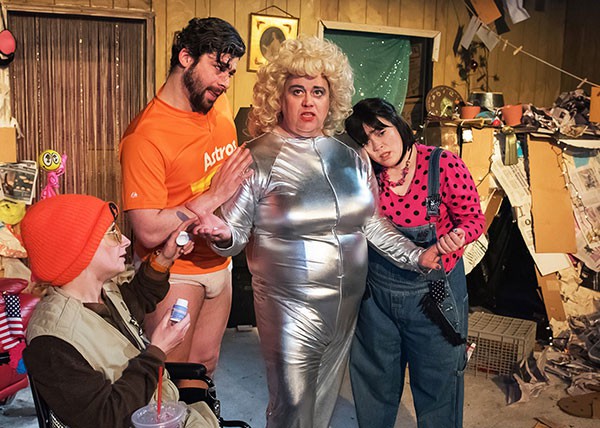 You’d have to book a flight to Tampa Bay to catch a sight of former burlesque queen Chesty Morgan, the star of Doris Wishman’s iconic exploitation spy films Deadly Weapons and Double Agent 73. Lucky Chicagoans, though, need only travel to Wicker Park’s Den Theatre to earn a glimpse of Jinx Malibu, the fictional empress diva featured in the Rocket Pussy films, in New American Folk Theatre’s Midwest premiere of Trash.

Playwright Johnny Drago’s take on the Anna Nicole legacy and Tennessee Williams’ classic The Glass Menagerie finds a celebrity blogger arriving on the garbage laden doorstep of the reclusive Malibu. There he discovers Loogie, Malibu’s underwear clad oldest son, the crotchety Othermomma, Malibu’s sarcastic, domineering mother, and Smudge, Malibu’s dreamy yet sheltered daughter. Mistaking him for a Hollywood producer, Malibu and her family act out her deluded version of a comeback film. The horrified blogger plans to escape with the adventure seeking Smudge in tow, but the violence that has been lurking between the cracks of Drago’s setup eventually erupts with one of the cast members, in a moment worthy of an ‘80s slasher flick, reenacting the circumstances of Patsy Cline’s “I Fall to Pieces”, in graphic detail, in Jinx’s front yard.

Thankfully, director Derek Van Barham, who is immeasurably assisted by Clint Greene’s layered scenic design, highlights both the humor and the tension inherent in the lurid reality show circumstances on display here. He is helped, as well, by Anthony Whitaker’s commanding take on Jinx. Whitaker brings a sympathetic edge to the character’s most garish demands and is never less than compelling when on stage. Nicely, the divine Caitlin Jackson, known for her powerhouse portrayals of such icons as Bette Midler and Bette Davis, is allowed to show a more sensitive and hopeful side as Smudge, the show’s one true ray of light, while Kirk Jackson brings a nice sense of physicality and puppy dog energy to Loogie. Meanwhile, Carrie Campana fills Othermomma with a wisecracking weariness, a nice balance to Jamal Howard’s (momentarily) enthusiastic writer.

Trash runs through May 15th at The Den Theatre, 1333 N. Milwaukee in Chicago. More information is available at www.newamericanfolktheatre.org.