Seemingly made as a knockoff of Joy Ride, which reached audiences in the fall of 2001, Road Rage was actually a television film, released theatrically in South Korea and direct-to-DVD elsewhere in 2000. Thus, this Sidney J. Furie helmed action-terror hybrid was actually filmed a good year or two before Paul Walker and Steve Zahn ever contemplated that very revealing walk into a roadside diner.

Fortunately for fans of grilled cheese, as action orientated as this piece tries to be (with vigorous chase scenes occurring both on major thoroughfares and dusty country lanes), what may be most notable about this stalk and crash epic is the truly inappropriate casting. Lead Casper Van Dien was at least 30 years old at the time of filming – thus way, way too old to play the endangered college student that he portrays here. But he attacks his role with professional enthusiasm and, faint praise resonating, is actually probably the youngest looking of his co-stars. This includes heroine Danielle Brett, whose film career would only last another year or so. Van Dien also does a heroic, if losing, battle with the neon crayola dye job someone gave his professionally pompadoured hair.

Nicely, Catherine Oxenberg, famously the star’s wife at the time, shows up as a noticeably glamorous forest ranger who, unsurprisingly, meets a violent end at the wheels of the characters that are vengefully pursuing Van Dien’s Jim Travis. 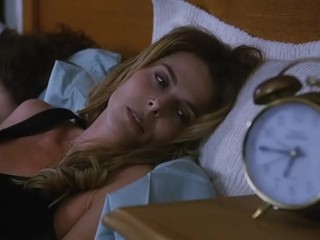 Lest one thinks these are damning points, these often ridiculous circumstances are actually the reasons why films like this are so enjoyable, making them worth a look or two on those nights of relentless sleeplessness and morbidly existential despair.

In my opinion, if you going to get stalked down by a heavy breathing psycho on wheels then there is no one better to have on your (trying to) getaway vehicle’s radio than vibrant, dusty voiced Brenda Lee.

Apparently, the producers of 2001 thriller Joy Ride agree with me. They featured two songs from Lee on the soundtrack to that truck stop inducing terror ride.

Here’s one of ‘em. Roll the windows down and enjoy!