Squarely belonging in the quirky, femme drenched filmic universe highlighted by cinematic historian Kier-La Janisse, The Strange Possession of Mrs. Oliver hits its magnitude of magnificence due to the wonderful complexities of Karen Black’s lead performance.

Without a doubt, Black will always be one of celluloid’s most unique performers. Universally brimming with intensity and a lush sensuality, she was at the height of her powers in 1977 when this television film was made. Relishing her many close-ups here, she, indulgently yet effectively, brings all of the title character’s confusion and discovery to life. Whether you are intrigued (as I am) or dismayed by her often-eccentric technique, there will never be another like her.

As scripted by I Am Legend’s prolific Richard Matheson, this 78-minute piece of Gothicism begins as the timid Mrs. Oliver tries, unsuccessfully, to break out from beneath her husband’s (George Hamilton) severe, limited expectations of her. Bristling beneath the demand that she revoke all her freedoms for motherhood, the mousy woman ultimately starts to transform into a liberated swinger after a shopping trip to a local mall. Encouraged by a sexy dress shop employee (Gloria LeRoy) to suggestively dress and enjoy the fantasy of masquerading in a blonde wig, she soon begins dreaming of fiery landscapes and a violent past. Catching the eye of a mysterious stranger (Robert F. Lyons) during one of her nocturnal romps, this transformative adventuress is soon facing death in the face. Thus begins a quick race against time to discover the truth about herself before that ghoulish threat catches up with her completely.

Directed with a languid smokiness by AIP horror emperor Gordon Hessler (Scream and Scream Again, Cry of the Banshee), this project belies the limitations of its running time by offering up a solid mystery and the excitement of watching its main performer work her singular magic. 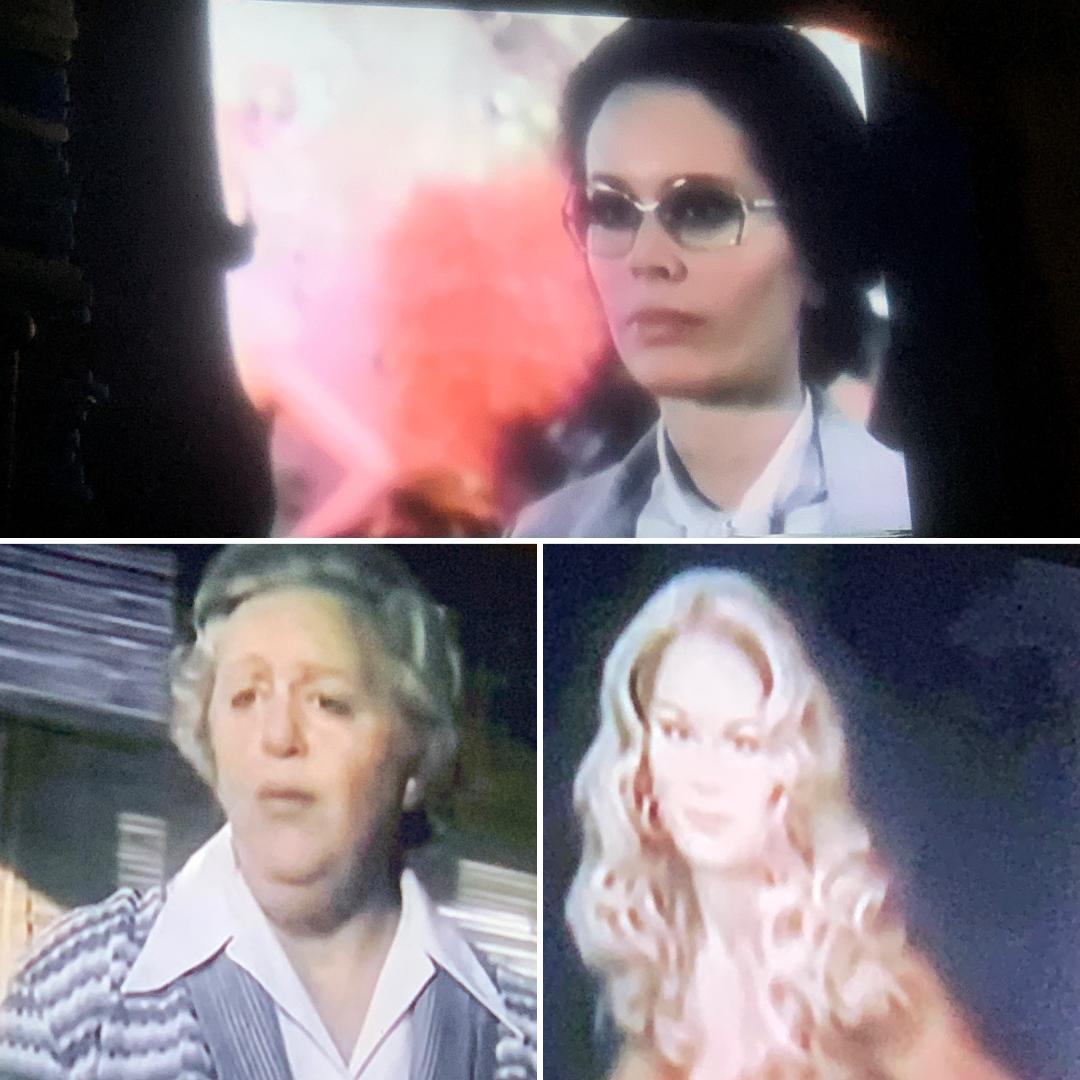 The last time Big Gay Horror Fan played sports in the nude, he was 6 months old and playing kick ball in his momma’s tummy.

Thankfully, for appreciators of fine male flesh, handsome Cameron Dye (The Last Starfighter) shows just what he is made of while playing a game of one on one in 1988 slasher/police procedural Out of the Dark.

Centering around a group of phone sex worker/actresses who are being murdered by a psychotic clown, Out of the Dark can be recommended almost solely by its amazing cast. Filled with genre regulars like Karen Black(Trilogy of Terror, Burnt Offerings, House of 1000 Corpses), Karen Witter (Buried Alive, Popcorn, Midnight, The Vineyard), Starr Andreeff (Dance of the Damned, The Vampire Journals, The Terror Within, Amityville: Dollhouse) and Karen Mayo-Chandler (Stripped to Kill II, 976-Evil II, Hard to Die), OOTD, also, features cameo appearances from exploitation regulars/faded Hollywood greats as Divine, Lainie Kaizan, Tab Hunter (whose bit as a surprised motorist is some of his best on camera footage) and Paul Bartel. Add character actors like Geoffrey Lewis, Bud Cort (Harold and Maude), Silvana Gilardo and Tracy Walter into the mix and you have a low budget cinephile’s paradise!

Here, Dye plays Kevin Silver, a photographer with access to all the victims, as his girlfriend, Kristi (perky Lynn Danielson), works with them. As police investigators examine the consistently half-naked Silver’s muddied past, he and Kristi decide to unwind with a game of basketball. Kristi has other ideas, though. As Kevin/Dye goes to take the first shot, she pulls down his shorts giving the audience a nice view of his svelte globes o’ loving! Later as things continue to escalate, the two seek further solace in a passionate romp in a sleazy hotel, offering us a nice side view of Dye’s healthy assets, as well.

Of course, this being a (slightly predictable)exploitation gem, even though Kevin/Dye often shows us, here, that he has nothing to hide – the film’s final scene just may reveal he has more circus mayhem in his blood than previously thought.

Proving that male beauty translates well in any language, here is a French trailer for Out of the Dark featuring many of this film’s highlights:

Be sure to check back, often, as Big Gay Horror Fan (https://www.facebook.com/BigGayHorrorFan) frequently exposes (the all too infrequent) male nudity in horror films!