I must admit. The soiree that was thrown to get me into Sister Rosario’s Leather Tutorial when I was 18 was totally and regrettably forgettable.

Thankfully, Pat’s party to help get her sister Jodi into a sorority, in 1986’s totally bad yet achingly fun Dreamaniac, comes complete with bitchy backstabbing, death by electrocution, an alluring succubus and lots and lots of male nudity. 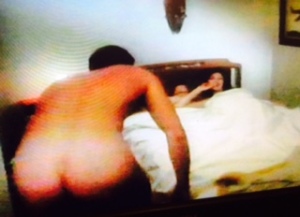 Yes, unlike his current 1313 offerings, which feature plenty of gym boys whose underwear remains firmly on, director David DeCoteau actually fills the frames here with plenty of bouncing male ass cheeks! This includes a deliciously long opening intro featuring male lead Thomas Bern, playing the most unlikely heavy metal rocker ever committed to the screen, walking naked, in light strewn languidness, down a never ending dream corridor. When Jodi’s antagonistic rival Frances beds Brad (Brad Laughlin), the object of the other’s affections, more fleshy global goodness is soon on display, as well. Of course, tough guy Ace (Michael Warren) does give a very homoerotic take on DeCoteau’s favorite celluloid subject – the trussed-up jock in tighty whities. So, there is something for everyone, here!

Filled with rancid performances, with future adult film star Ashlyn Gere, here billed as Kim McKamy, giving the only fairly decent portrayal as the determined Pat, and super silly dialogue (with “There’s no phone? What if I have to call my broker? Mondo bad planning, Jodi!” and “I’m a Lionel Ritchie girl” among the winners), Dreamaniac eventually succumbs to the delightful. Well, that is, if like me, you enjoy the cheese on your bread a bit on the burnt and moldy side.