My dad would have been 75 last week. In some sort of coincidental converging of significant dates, we are also inching towards the 20th anniversary of his passing. His death in 2002 was totally unexpected….there was no early term cancer or other major health issues – just one final popping of his heart, one warm, late summer afternoon . That endlessly surprising week, my sister and brother & I camped out in the living room of his house in the far stretches of Western New York, pouring through boxes of photos & family mementos, writing his obituary. I would wake in the morning on the floor of that well worn area, my body curved towards my sister’s on the couch, almost like a human cocoon. It was like I was trying to protect her, unconsciously in the night – to cradle her from any further, completely unexpected blows. My niece Gabby arrived later in the week, descending breathlessly upon the funeral home with her father & younger brother. There was no one my father and I adored more in the world…each of us fighting to spend as much time with her as possible on those all too rare get togethers between our far flung family members. That evening, I walked with her into the waiting area where we, quietly, looked at all the memorabilia pertaining to my dad’s life – his existence laid out on cork boards and carefully scattered photo albums. There, upon seeing a photo of herself and my father, my dear, dear niece’s chin began to quietly tremble. As her adorably plump cheeks quivered, one single, fat, perfectly formed tear eventually leaked from her left eye. “Grandpa is dead,” she gasped, “and – I – will – never – ever – see – him – again!”

And I, being the kind of uncle who sang her Husker Du songs as lullabies when she was a toddler and tried to engage her in feminist chants during my infrequent stints as a babysitter , said, “Oh no, you’ll see him again, honey! He’ll appear to you when you need him the most. Your great grandmother, dad’s mom, has shown up to talk to me…even on the day of her funeral. So, maybe you’ll even see grandpa this week. But even if you don’t, he’ll be watching over you, always.” Perhaps, thankfully, it didn’t register in her 5 year old mind that her agnostic, punk rock loving uncle was talking to her about ghosts as the dawn leaked away from the sky that twilight gloaming – but I was….& perhaps rightfully so. My niece has grown up to be strong and sure and independent- the product not only of her own fierce will & a strong familial hand… but perhaps also due to the presence of a man who loved her very much and who has been watching over her from some misty, far off plane.

Creatively, he revolutionized the horror genre by inventing an offshoot that revolved around excessive gore. Due to his business acumen, you can probably blame a lot of the junk mail that fills your mail boxes on him, as well. Meanwhile, personally, filmmaker Herschell Gordon Lewis, who died this week at the age of 90, was a compelling presence whose commands were not to be ignored – even by the youngest of us.

It’s mid-October of 2011 and Lewis is appearing at a 24 hour horror movie marathon in Chicago. In the evening, a few of us retire to a pub, next door, for dinner. Lewis is, happily, leading the conversation, taking our enthusiastic questions and giving them detailed and energetic answers. He is in his element except — a child in a high chair is letting out high pitched and elastic screeches, every couple of minutes or so, in the booth directly behind us. Each shriek jolts him out of his reveries and it is obvious, as time wears on, that he is losing all patience.

Finally, as the cranky babe lets out another voluminous wail, Lewis raises himself up, with grave dignity, and still seated, bellows out, in the direction of the child, with Greek authoritarianism, “STOP – THAT – NOW!” Each word is a separate thought, punctuated with irritation and will.

The toddler halts mid-cry and…is totally and completely silent for the rest of the meal.

Now perhaps, there are two sides of the table to fall on, socially, here. One side will be sympathetic towards struggling parents with infants and understanding of the need to get out with friends and colleagues, sometimes even with a whiney child in tow. The other side may feel, emphatically, that, in the name of common courtesy, children should be kept at home until they are more manageable. Good points, each.

But…I have a feeling that both sides can agree on the fact that even a mewling babe knew that it was important, if not vital, to listen to and obey Herschell Gordon Lewis – a sure and fabulous testament to his effective worth,  if there ever was one!

So, Rest in Peace (whoops, I almost wrote ‘piece’), you crazy and creative bastard! You will be missed.

A film critic once, heartlessly, questioned why the resilient Theresa Saldana appeared in 1984’s violent The Evil That Men Do with Charles Bronson. Saldana, who was stabbed 10 times in a vicious 1982 stalking attack, went onto to thrive despite such pettiness and, besides acclaimed acting chores in such vehicles as The Commish, she was well respected for her activism, which included the founding of the Victims for Victims organization. Thus, her death on June 6th, 2016, at the age of 61, from (as yet) undisclosed causes, has hit the communities who loved and respected her especially hard.

One of those groups has to be fans of television terror projects, as Saldana made memorable appearances on both the beloved anthology Tales from the Darkside and the short-lived Werewolf series, which chronicled the adventures of a young man who drifted from state to state, trying to find the evil man whose bite had turned him into a monster.

Nicely, as the sweet and sunny Audrey Webster on the Black Widows segment of TFTD, Saldana radiates with an easy joy. Her character’s brightness is soon deflated, though, when Webster discovers, on her wedding night, that she has a dangerous craving. Reducing her husband to a husk, Saldana, concisely, explores both her character’s despair and her unrelenting needs. Soon, a priest – no true loss there, huh? – finds himself caught in Audrey’s ever nefarious web – with evidence, at the fade out, that others are eventually going to follow in his shrieking, tangled footsteps. 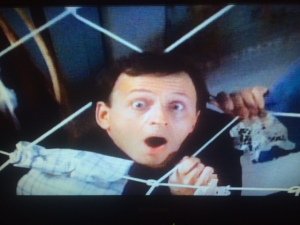 Formidably contrasted by the brittle antics of former Hollywood superstar Margaret O’Brien, who lit up viewers’ hearts as the adorable Tootie in the classic Meet Me in Saint Louis, as her mother, Saldana, who was perhaps best known for her work opposite Joe Pesci in Raging Bull, ultimately uses this episode as a true showcase of her multiple talents.

Saldana doesn’t get to show as many colors as Rosa in the two part A World of Difference on Werewolf, but she does show plenty of compassion for Eric (John J. York), the show’s young lead, and even for his antagonist, the determined Alamo Joe Rogan (Lance LeGault). As Eric, fights his animalistic nature in a prison cell, Saldana’s Rosa tries to assure Rogan of the lad’s essential goodness. She even reiterates this to Rogan in his hospital bed, after Eric escapes. As the crusty hunter wonders if he has been bitten by Eric, and thus become a victim of the werewolf curse, Saldana quietly conveys Rosa’s belief in the good of all men. It is a fairly small, almost one dimensional part. But Saldana exhibits a ingratiating peacefulness here that makes her passing all the sadder. 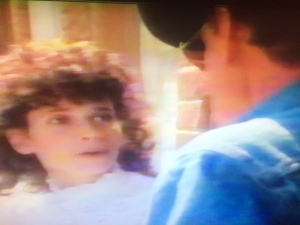 So, let us offer up a final thought to this kindhearted warrior and eternal goddess. Sleep well, Theresa.