Her work as cruel prison matron Evelyn Harper in the historic WIP effort Caged earned the distinctive Hope Emerson an Academy Award nomination and a place in history for creating one of the most odiferous presences ever committed to celluloid. Immortalized on the track Miss Pamela and Miss Sparky Discuss Stuffed Bras and some of their early gym experiences on the 1969 (Frank Zappa produced) GTOS’ album Permanent Damage, Emerson actually manipulated her unusual height and malleable face to great effect in a variety of roles.

Besides her grand efforts tormenting Caged‘s Eleanor Parker, Emerson effectively backed up everyone from Edward G. Robinson to Greer Garson to Bob Hope. One of her final roles, though, brought out an acidic maternal quality and gave her great recognition among jazz buffs and beat swingers. 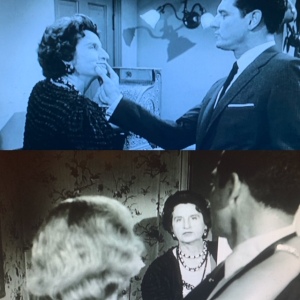 As the gruff, but loving Mother on Blake Edwards music drenched series Peter Gunn, Emerson did some of her most sensitive work. Beaming with matriarchal pride, Emerson affectionately interacted with Craig Stevens and Lola Albright, the performers who played the titular, danger ridden private eye and his teasing chanteuse girlfriend. Utilizing her impressive 6’2” frame, this veteran performer rounded out her affectionate antics here with a take no guff attitude. Thus, only the series’ roughest thugs dared to mess with her…and usually from a distance and with the help of explosives when they did!

Dying at the far too young age of 62 from liver disease, those who appreciate fine performances know that Emerson has definitely left behind a memorable legacy of characters.  Her striking signature style refuses to fade quietly into the mists of time.