Aw…all he really ever wanted was love. Indeed, Ilan Mitchell-Smith, best known as Wyatt, part of the awkward duo that helped create a magically scintillating temptress in the popular science fiction comedy Weird Science, ended his quest for the perfect woman with his final acting role on a steamy episode of the syndicated series Silk Stalkings.

The television version of the straight-to-video thriller that clogged the HBO and Showtime airways throughout the  ’80s and the ’90s, Silk Stalkings was a weekly Femme Fatales magazine come to life. Featuring gorgeous women who plotted and connived and/or who were often the victims of savagery and twisted sexual domination, Stalkings, as with much exploitation fare, also featured a tough, take charge female at its heart. Here it’s in the form of Mitzi Kapture’s razor talking police sergeant, Rita. Kapture often narrated the episodes with a ’40s gumshoe vibe and successfully got away with the show’s most humorously sarcastic lines. 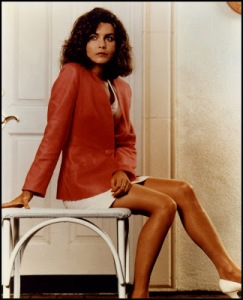 In this particular episode, entitled Men Seeking Women, a bevy of beauties are being viciously annihilated, with their fingernails being pried off during the death throes. Rita and her partner Chris, played by the unbelievably handsome Rob Estes, soon determine a serial killer is at work, targeting females who have posted in a singles magazine. Rita sets herself up as bait and, unwittingly, allows Mitchell-Smith’s nervously quiet Gabriel Evans access to her home address. Indeed, playing against expectations (but without any real surprises), it is the meek Evans who is the culprit here and Rita is soon fighting for her life, with Chris, eventually, rushing in to aid her in her desperate battle.

What is surprising is that, despite top guest billing and the fact that his character is the focus of the proceedings, Mitchell-Smith is absent from most of the episode. He appears in two brief scenes – his first meeting with Rita and his attack on her. Instead, much of the episode is devoted to Chris’ budding romance with an exotic dancer and his struggles to deal with her profession. It does, perhaps, add a bit of ironic appeal – contrasting the tough-ass too sensitive to accept his girlfriend’s exhibitionism with the meeker underling who makes a more violent display of his discontent. Still, Mitchell- Smith radiates essential goodness in his first appearance and a more pathetically destructive essence in his final moments, allowing fans to wish that he had continued in the profession a bit longer.

Currently, a professor of Medieval Literature and an enthusiastic gamer, Mitchell-Smith’s tweets prove him to be a fun and honestly liberal presence, deserving of following at www.twitter.com/IlanMS.

Until the next time -SWEET love and pink GRUE, Big Gay Horror Fan!