Known primarily as a musical comedy star and cotton candy-like romantic siren, film legend Doris Day also managed to work up a nerve wracking scream or two when the screenplay required it. In fact, her startled yelp in Alfred Hitchcock’s The Man Who Knew Too Much should, justifiably, be considered one of film land’s most iconic moments. Still, Day (ascertained to be one of the most naturally proficient un-trained film actresses by many scholars) often got so emotionally involved with her character’s inner lives that she limited her thrilled based appearances to just a few.

Her entrance into the scare sweepstakes was in a 1956 wife-in-peril feature called Julie. The film opens up with Day, frantically, running from danger. Nicely, the film’s lush yet pulsing theme song, naturally sung by Day, plays in the background, as she sprints for her life. Unfortunately, Day’s Julia is soon nabbed by the suave Louis Jourdan, who plays her conniving husband. Taken on a ride from hell, Julia barely escapes with her life. Of course, Jourdan’s villainous Lyle is far from done with her. By the production’s end, Day’s plucky stewardess heroine, foreshadowing Karen Black by twenty years, must help land the aircraft she is stationed on as Lyle has emasculated all of the crew.

In The Man Who Knew Too Much, filmed in the same year as Julie, Day is placed in familiar territory, character wise.  Here, she is Jo, a former singing sensation, living a low-key life with her doctor husband (James Stewart) and their lively son. While on vacation in Morocco, Stewart’s character receives details of an assassination plot from a dying acquaintance. Soon the duo’s son is mysteriously kidnapped to buy a measure of silence. Unaware, Day’s character is drugged into calmness and then told of her son’s disappearance. Day’s multi-leveled portrayal in this scene is matched only by her subtle reactions in the film’s final sequence. Here, Jo has to play piano and sing for a gathering of London diplomats while simultaneously trying to rescue her son with nothing more than the sound of her voice. This is almost inconceivably amazing performing on Day’s part. Along with Hitchcock’s storytelling skill and the quirkily enjoyable performances from genre icons Reggie Nalder (Mark of the Devil, Zoltan) and Carolyn Jones (The Addams Family, House of Wax), it is the primary reason for indulging in this suspenseful, beautifully photographed picture.

In 1960’s Midnight Lace, Day actually became so involved in the travails of her wealthy Kit that she was rumored to have had a nervous breakdown on the set. In fact, several acquaintances (and a gossip columnist or two) reported that Day did not want to do the picture, but was strong armed into doing it by her then husband, the film’s producer Marty Melcher.

While Lace (unreasonably dismissed by several Day biographers) centers around a fairly standard Gaslight plot, it is also lushly filmed and contains many moments of true suspense.  In fact, anyone who has been spooked when walking alone in the dark or has felt the claustrophobic fear of being caught in an enclosed space will have much to relate to in the film’s tensest moments. While the opening credits pass by, Day’s Kit is stalked down a foggy London street. The dense cinematography and Day’s realistic reactions make it a strikingly suspenseful sequence…and an electric start to the feature as a whole. Day’s escalating terror as Kit is eventually trapped in an elevator and frantically fights for her life, leaves no doubt to her attentiveness to detail as a performer and, on a more lurid note, is strong evidence for the multiple reports of Day’s subsequent collapse on set.

Worthy of multiple viewings for its atmospheric attention to detail alone, this film also features John Gavin of Psycho fame, the legendary Myrna Loy (Ants) as Kit’s kindly aunt and Roddy McDowall, whose many genre credits include the original Planet of the Apes films and the blackly disturbing (and often ridiculous) killer baboon project Shakma. 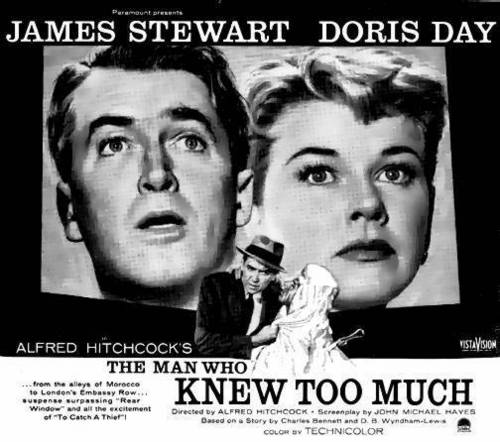 All of these Day dominated films feature subtle elements of terror and are definitely recommended for those rare nights when another bloodbath just seems too much for your system to take or when your non-horror loving companion needs a little break from all those scenes of relentless gore.