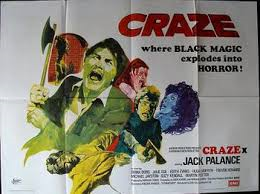 There is always something a little homoerotic lurking around the corner, no? Well, maybe not always. But it is truly a delight to discover something a little lavender-suspicious in a favored horror film – especially one starring such a magnetically male presence as Jack Palance.

In 1974’s fairly rare British terror Craze, Palance plays Neal Mottram, an antiques dealer with a failing shop. That is, it is severely floundering until Mottram starts sacrificing a bevy of attractive women to an African idol that he keeps in his store’s basement. Then the profits start rolling in. And Palance’s upstanding Neal claims that he is doing it all for….

…his very handsome (male) flat mate and assistant Ronnie, quietly played by Satan’s Slave’s Martin Potter (who, interestingly, showed off a ton of flesh in Fellini’s bizarrely mythical and very queer Satyricon). Granted, there is no evidence of any bedroom activity between Neal and Martin on display, here. But director (and award winning cinematographer) Freddie Francis (Tales from the Crypt, The Deadly Bees) and the film’s multiple screenwriters do not negate the intense connection between the two by offering up a modest, paternal back story either. Neal is often seen cajoling the reluctant Ronnie into his schemes, often with a firmly familiar grip on the shoulder. Call this what you may, fatherly, brotherly or homosexuality, one thing is sure. Although, Palance beds such genre stalwarts as Julie Ege (The Mutations, The Legend of the Seven Golden Vampires) and, in a roundabout way, Diana Dors (Theatre of Blood, Berserk) and Suzi Kendall (Torso, The Bird with the Crystal Plumage) here, it is his character’s relationship with Ronnie that is the emotional focus of the film and when betrayal does rear its ugly head, Neal acts like a spurned, slightly (well, totally) maniacal lover. 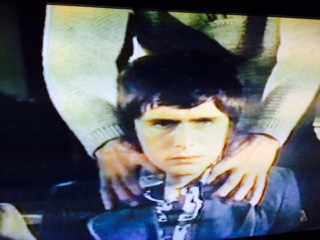 Interestingly, while the vague boundaries of Neal and Ronnie’s relationship could be labeled as progressive for the time and subject matter, Dors’ character, Dolly Newman, is treated in an incredibly shaming and sexist way by the creators. Obviously meant to slip some humor into the film’s more lurid atmospherics, it backfires. Especially when viewed in a modern light.

Publicized in the 50s as England’s answer to Marilyn Monroe, Dors exposed her voluptuous figure in such noir style offerings as Blonde Sinner and Man Bait. (She was, also, famously sawed in half in an excellent episode of Alfred Hitchcock Presents, 1962’s The Sorcerer’s Apprentice.) But, just like Monroe, there were many who felt her talents were far superior to the material she was often given.

Here, she plays Dolly with a flirty, slightly breathless ease. But it must have been a difficult role for her to attack. Only in her early 40s when filming Craze, she is still a highly sexual creature. But the few extra pounds that she had gained since her heyday set her up as a comic troll, here. Neal is visibly disgusted by even having to share a bed with her. (He gets her so drunk that she passes out before sex.) Interestingly, this reaction is very reminiscent of Robert Mitchum’s treatment of Shelley Winters in The Night of the Hunter, sending out further vibrations of the pink variation.

Adding insult to injury, though, the policeman following (the now highly suspicious) Neal, further slander Dolly by firmly asserting that no man would want to have sex with someone like her. This ‘joking’ observation seems more based on the entertainment industry’s position about any woman over a certain age and a certain weight than any kind of reality. But it’s a harmful troupe to shame any woman (fictional or otherwise) over 20 who seemingly enjoys having sex. This is especially true since Dors is still a very attractive woman and projects a certain Nina Hartley quality in this project. As in, like that veteran porn performer, she seems like she could certainly teach any sexual conquest a thing or two.

Despite this highly humanistic blight, Craze does remain an interesting piece. As he has been accused of on several of his projects, Francis’ direction is merely serviceable, but Palance truly brings a nice balance of calm determination and calculating fervor to his take on Neal. Fans of horror performers, also, could dine out on the balanced buffet that Dors, Ege and Kendall offer up, as well. David Warbeck (The Beyond, Panic, Formula for a Murder), also, shows up in a smaller role. Meanwhile, the idol that Neal worships is a hilariously metallic looking piece of eye buggery, ultimately giving the proceedings that ridiculous tint that so many exploitation efforts thrive on.