Decades after her cinematic reign, the irreplaceable Linda Hayes was featured in the popular art house film Brooklyn. While that was definitely a tribute to her talent, Hayes made an even more potent impression as the duplicitous Margaret Forbes in 1941’s The Saint in Palm Springs.

Here George Sanders’ adventure seeking Simon Templar (AKA The Saint) is momentarily lured in by Forbes’ beauty and grace. But with a sense of soft intrigue, Hayes soon reveals Forbes’ true intent. While trying to steal a priceless stamp from Sander’s suave adventurer, she meets a deadly end. But until then, Hayes is obviously having a good time playing all the flirtatious, two sided aspects of her character.

Unfortunately, Hayes left the world of performing behind in 1942. But eagle eyed cinema buffs are sure to recall her grace and glamour in the glowing embers of the midnight hour, as the shine of late night television wavelengths lulls them off to sleep. 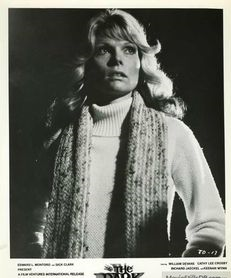 While Hayes had no horror credits on resume, her daughter Cathy Lee Crosby, with whom she shares a great facial resemblance, starred on an episode of Kolchak: The Night Stalker and the 1979 creature feature The Dark.