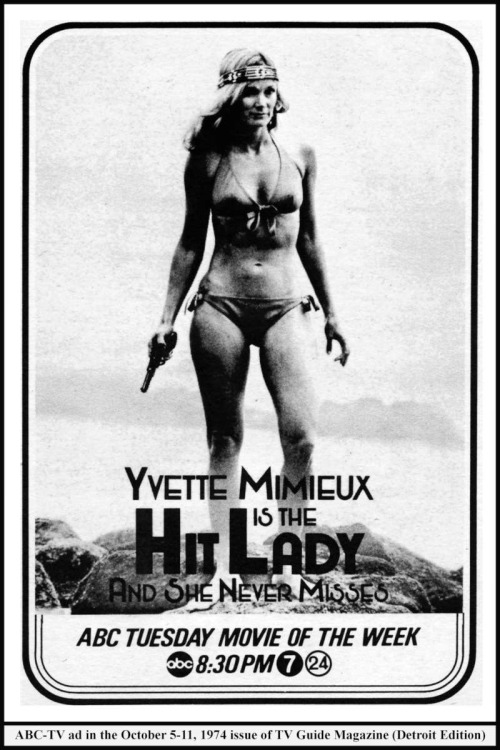 (Love it or hate it, the Carrie remake will be upon us in October – thus we celebrate the strong women in horror, science fiction and exploitation with Countdown to Carrie!)

Thought of as a purring sex kitten to some, due to her roles in such 60’s fare as Where the Boys Are and The Time Machine, gorgeous Yvette Mimieux decided to take control of her career in the mid-70’s and crafted a fun and powerful vehicle for herself with the television film, Hit Lady (1974).

As sharp shooting Angela deVries, Mimieux combines frivolity and feminism to grand effect here, all while dashing about in personalized Nolan Miller designs. Of course, by the time we meet Angela love has started to melt her cold heart and she finds herself unable to commit to her last kill-for-hire. Thus double crosses and frantic car chases decorate the last act of this quick moving vehicle. Add in a downbeat ending, more fitting for a European indie than a jaunty ABC production, and you have a fizzy cocktail decorated with a ferocious female at the lead.

Mimieux, no stranger to television terrors such as (beloved entries) Snowbeast and Devil Dog: Hound of Hell, is joined here by frequent genre personality Clu Gulager (Return of the Living Dead, Feast, Nightmare on Elm Street 2) who practically radiates slime as her duplicitous boss.

Even a queer fear angle is provided for via the participation of veteran actor Keenan Wynn (Piranha, The Dark, Hysterical) and the exquisitely handsome Dack Rambo (Nightmare Honeymoon, Good Against Evil) as the artist whom entrances de Vries. Many old school Hollywood biographies make note of Wynn’s bisexuality. In fact, it was rumored that Wynn divorced his wife, Evie, so that she could (happily, it is noted) marry his lover, screen idol Van Johnson.

Meanwhile, shortly before his tragic death in 1994 due to HIV complications, Rambo acknowledged his bisexuality in detailed, heartfelt interview with Soap Opera Weekly.

Until the next time SWEET love and pink GRUE, Big Gay Horror Fan – aka – www.facebook.com/biggayhorrorfan!