(Let’s face it, half the fun of horror and exploitation is seeing some hot bodies frolicking around in the buff. And while I worship the female form, I believe exploitation definitely veers into the exploitive when only gorgeous women are on display while their male counterparts remain chastely buttoned up. Therefore, The Backside of Horror salutes the filmmakers and actors whom even up the score a bit by showing us instances of hot and juicy male flesh in their bloody celluloid fantasies.)

“Paul” and “Ted” mentally prepping to take it all off!

Thank the gay gore gods for director Joseph Zito. While plenty of the original Friday the 13th films feature femmes sans tops, this maverick filmmaker (The Prowler, Red Scorpion) leveled things out (a smidge) with his 1984 entry in the Jason slaughter-a-thon.

During that iconic film’s swimming sequence (a staple of the series), not only do the dangerous dames reveal themselves, but Alan Hayes (as Paul) and Lawrence Monoson (back in action after a revelatory performance in 1982’s The Last American Virgin, as Ted) also such off their clASSic forms, as well. 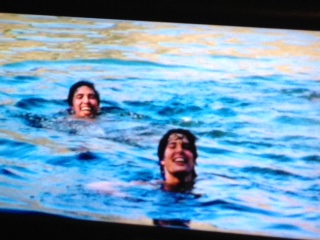 Be sure to return for more “The Backside of Horror” while Big Gay Horror Fan is forever shaking off water like a dog at http://www.facebook.com/biggayhorrorfan, as well.

One comment on “The Backside of Horror: Alan Hayes and Lawrence Monoson, “Friday the 13th: The Final Chapter””