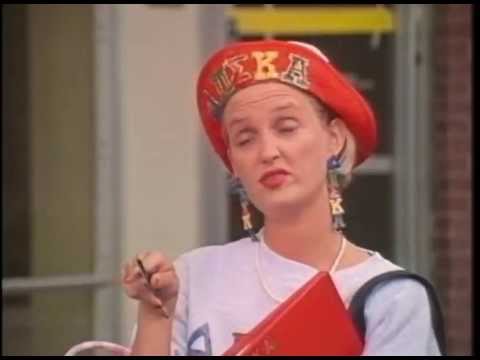 If John Waters was born a couple decades later and got his start in independent horror, the result might have been something like Tommy Faircloth’s 1995 low budget feature, Crinoline Head. 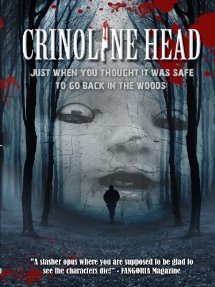 Featuring a killer who slices his way through the cast with a skirt on his head, a demented transsexual as the roadside portent of doom, plenty of sexual ambiguity among the victims and (an eventual)death by celery, Crinoline Head is a fun homage to the slashers of the ‘80s.

Recently released for the first time on DVD, this critic’s darling is highlighted by a brilliantly bonkers performance from Tracy Powlas (pictured above) as sorority happy Jenny. Powlas recites her lines in an exaggerated sing-song all while continually squirming, skipping and bouncing her way through the film! And that is no simple “Whatever,” my fiends! For while the other cast members (including Billie Fontanez as the ‘athletic’ Cathy and Brian Kelly as the intellectual outcast) offer up some finely understated moments, this is truly Powlas’ ecstatic, elastic show! 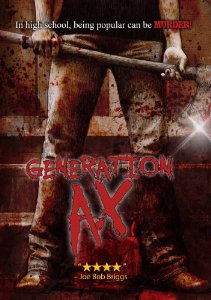 Six years later, the determined Faircloth returned to the terror playground with the enjoyable Generation Ax (2001). Here, he merges the Tarantino-esque antics of such popular 90’s adventures as Kalifornia, Natural Born Killers and True Romance into the horror mix by concentrating on a high school couple (nicely played by Brian Kelly and Marina Morgan) whom forge a bond over episodes of murderous bloodlust. As they off everyone from cruel cheerleaders to obnoxious theater employees, the film significantly connects due to the fact that every (formerly) awkward viewer can put themselves in the main couple’s shoes. Who hasn’t imagined causing harm to those that have bullied them?

Just as in Crinoline Head, even the most inexperienced performers have a certain charm here and it is a blast to watch future fitness guru Jennifer Peluso (memorable for her super fun turn in the Debbie Rochon starring anthology flick Hellblock 13) prance through the flick as awkward cheerleading wannabe Leslie.

Despite an ending that, while tying into the excellent opening scene, feels a bit abrupt, Generation Ax, like Crinoline Head before it, can count itself among the better low budget indie horror flicks.