Sometimes I wonder how I would have turned out if I hadn’t been kidnapped as a toddler and eventually raised by a group of psychotic prostitute lesbian nuns. Why, I might even like romantic comedies, now, which truly would be a horror.

In tandem, egotistical, drug addled, former child star Barry begins to wonder if maybe his upbringing might have something to do with the unparalleled mess that qualifies as his current life in the fun, upcoming horror-comedy The Trouble with Barry. Forced to crash with an old boyfriend, Barry takes a supporting role in a fledgling web-series to stay in the public’s eye and, hopeful, revive his career. But someone keeps murdering Barry’s co-stars and when he isn’t too busy being considered a suspect, Barry may find that he is next on the heinous killer’s list. 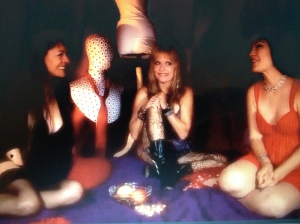 Directed by Mike Justice and Stephan Kitaen, who also co-scripted with Sean Singletary, Barry is a ravenously fun look at the desperate, self centered personalities that populate Hollywood. Terror lovers should especially appreciate the trio’s take on Asia Argento and an appearance from scream queen legends Brinke Stevens, Linnea Quigley and Michelle Bauer is a welcome treat, as well. The trio looks fabulous and they deliver their enjoyable dialogue with aplomb! Further ghoulish points are gained by the presence of terror icon Lynn Lowery as Barry’s notoriously nasty mother. Lowery delivers with multi-leveled delight, bringing all her (award winning) stage skills to the fore. She is truly a force of nature, here, proving, once and for all, that she is one of the classic buried treasures of the entertainment industry, as whole.

As for Barry, himself, Peter Stickles (well known for his romps in such creep-tastic projects as Cemetery Gates, The Lair and Evil Bong 3D) provides an enthusiastic, acidically humorous insight into the world of such tragic teen figures as Leif Garrett and Corey Haim. Stickles is most impressive, though, when he lets a little sensitivity shine through as Barry, confusedly, begins to feel affection for the director of his web-series (nicely played by Eric Dean).

In fact, while this project is full of sharp one-liners and classic gags (including a brilliant sequence wherein a militant feminist presents ultra-gay Barry with a poem entitled “Pussy”) throughout its running time, it could have benefited from just a tiny bit more of the closing act identification provided by Stickles. The well drawn characters are such thoroughly harsh indictments of Los Angeles style solipsism that they are hard to connect with on a compassionate level.

Still, that is a small criticism for such a professionally accomplished and creative project (and one that, also, contains a brilliant kill scene, taking place in a gym’s lobby).

To find more about this truly inventive project, be sure to check out:

And until the next time – SWEET love and pink GRUE, Big Gay Horror Fan