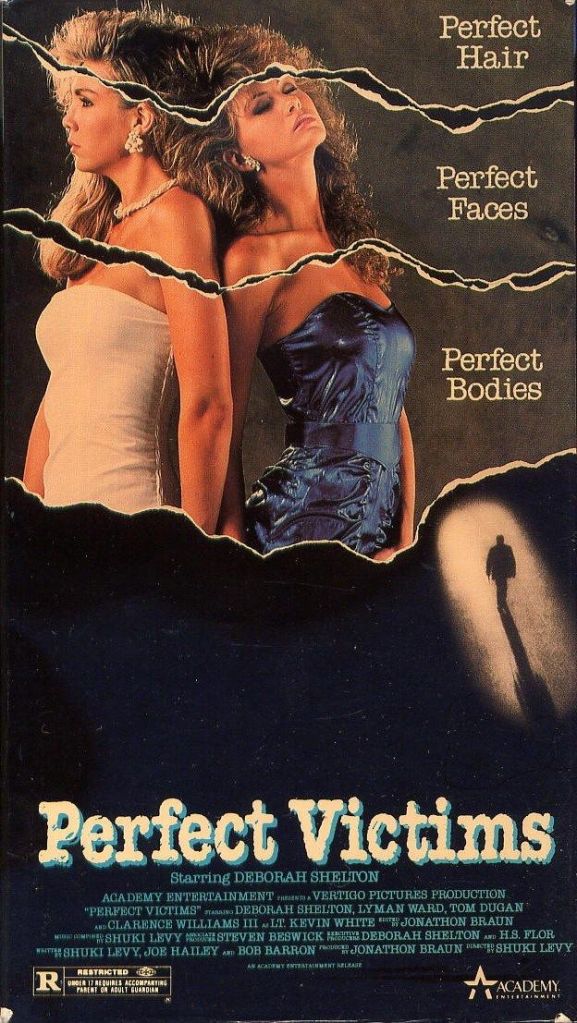 After showering, do you sometimes find that you can’t move your feet from the floor of your tub? Looking closer, you discover that your toes are stuck there due to the celluloid gunk that has escaped your body, probably from a recent encounter with some rare form of cinematic sleaze.

This happened to me, recently, after watching 1988 exploitation anomaly Perfect Victims. Advertised as a traditional slasher, this relative rarity seems to be searching for a higher social purpose than the regular T and A strangler, but misses the mark…by a long shot!!!

Soon after two young models (played by Jackie Swanson and Nicolette Scorsese) are signed by LA powerhouse Liz Waters, their home is broken into. Drugged and raped, they wind up in the hospital. The enraged Waters, in a Visiting Hours parallel, goes on a public rampage and earns the wraith of the demented assailant. The finale finds the three women, face to face, with their sadistic tormentor, fighting for their lives with dogged determination.

PV: Going to the dogs!

With no actual death on display here, Perfect Victims soon takes on the tenor of something similar to such women in peril pieces as Naked Vengeance, The Ladies Club and W.A.R.: Women Against Rape. (Minus the revenge quotient, though.) In a seeming effort to inject some political interest into the exploitation elements, it is eventually revealed that the attacker, angered that he contracted the HIV virus from a female partner, is purposely trying to infect all his targets with AIDS.

That incident may be the most powerful statement about what is wrong with Perfect Victims, as a whole, though. Exploitation, for all its transgressive energy and outrageous nastiness, is ultimately supposed to be fun, an escape. There is nothing enjoyable about watching characters struggle with the reality that they may have forcibly contracted a disease with the ramifications, including the devastating prejudice and eye rolling ignorance, this one had/has. (This would have been especially unpleasant to watch in the 1980s, when AIDS was highly likely to be fatal.)

Still, for all its rancid faults (including a moment when the assailant squirts his blood into the face and the mouth of an unconscious woman), this flick does retain a curious edge, particularly with one of its main characters. As the rapist, actor Tom Dugan gives a committed and chilling performance. His demented energy radiates from the screen, adding to the unsettling vibe. (The positive, here, is that you can actually appreciate his talent, as a result.) The presences of respected character actors like Lyman Ward (Ferris Bueller’s Day Off) and Clarence Williams III (Mod Squad, Tales from the Hood, Lee Daniels’ The Butler) adds certain legitimacy, too. Although one does wonder if they truly knew what they were getting into here. 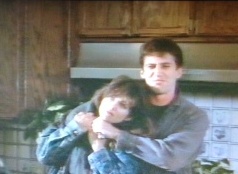 The women, meanwhile, offer up competent if undistinguished performances. (The trio of credited writers may be more to blame for that fault, categorizing their feminine presences as victims not actual characters.) As Waters, co-producer Deborah Shelton (Body Double, Silk Degrees) does bring a moderate haughtiness to her established character. And you have to hand it to her and the other creators; this attempt to mix real life tragedy with the cheap vibe of a ‘babes in danger’ thriller is always disturbing, frequently grotesque, yet rarely uninteresting. They were obviously aiming to add a statement of some sort to the litter of product decorating VHS shelves in the era of the video rebellion. It may be too much to call their attempt a noble failure, but I just might do it anyhow…Someday…Or not.