After Jenny disappeared down that endless pothole and Matt met his fate at the claws of that errant werewolf, I finally caught up in that forth grade one legged tent pole race!

Similarly, after exposing enough female flesh to cover a football field in the first four low budget (surprisingly popular) early 90s Witchcraft entries, the producers finally wised up and gave the viewing world what it truly desired – some fresh and happy ass cheeks…of the male variety…in 1993’s Witchcraft V: Dance with the Devil!! 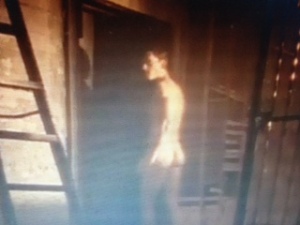 Here, the series’ holdover character William Spanner, in the handsome form of actor Marklen Kennedy, truly shook what the goddess gave him in an extended shower sequence.

Of course, this occurrence was just a momentary blip in this femme decorated collection. In the next several Witchcraft films, Spanner was as chastely covered as a Catholic priest. (Well, maybe that was not the analogy I was looking for. Oh, well…)