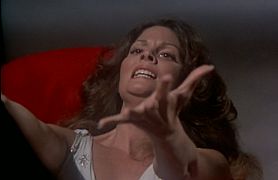 Languishingly lounging on a candle strewn barge, Warren’s unearthly creature soon earns the undivided attention of a small town clerk. His consistent nocturnal visits eventually make his girlfriend (played by Nightmare on Elm Street 3 & 4’s Brooke Bundy) curious. When her encounter with the fang bearing Hyacinth almost leaves her dead, she determines that her beau’s mysterious new obsession is, indeed, a vampire. Will a jealous co-worker and a possessive sweetheart soon mean the end of the gorgeous Hyacinth or vice versa? 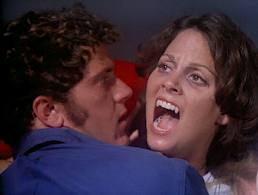 This episode (written by Halsted Welles via Everill Worrell’s story and directed by Leonard Nimoy) definitely reinvents some of the bloodsucker rules. Hyacinth hasn’t fed for over a year and is watched over by her human father. Yet the gothic Tennessee Williams’ vibe that Nimoy indulges in here is enchanting and the fetching Warren, whose other genre appearances include the CW enhanced Teaching Mrs. Tingle and 2001’s very interesting Wolf Girl, glows within its tragic overtones. She is magnetic, frightening and sympathetic. It’s a bravura performance in (a mere) 22 minute teleplay.